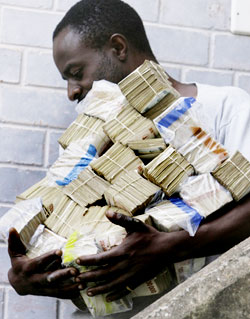 INFLATION and unemployment are generally regarded as the twin evils of economics. A simultaneous occurrence of inflation and unemployment causes what is generally termed stagflation; that is to say, a combination of stagnation and inflation within an economy (typical of what characterised the Zimbabwe economy in the run-up towards January 2009). Moreover, in Zimbabwe, these two dreaded evils afflicted the economy, leading to diminished GDP levels up to January 2009. Thereafter, the situation immediately took a dramatic turn for the better pursuant to the introduction of the multicurrency system.
The dichotomous occurrence of inflation alongside unemployment is the most dreaded episode in any country’s economic lifespan. Where inflation rears its head, especially if it mutates into hyperinflation as was the case in Zimbabwe prior to 2009, it is inevitable that the monetary authority (.e.g central bank) being the ultimate guardian of the purchasing power of money, becomes a subject of unending scrutiny and criticism.
Alan Greenspan, former US Federal Reserve chairman, once remarked that a monetary authority in a democratic society is a magnet for many of the tensions that such a society confronts. He added that, any institution that can affect the value of the currency is perceived as potentially affecting the level and distribution of wealth within that society.
The foregoing gives a quick adumbration of the importance of the value of money which unfortunately gets undermined by inflation, particularly if such inflation occurs alongside unemployment and mutates without any mitigation into hyperinflation. Against this backdrop, it is worth mentioning without any equivocation that Zimbabwe has managed with relative ease to cure one of the twin evils of economics, that being inflation which currently stands at about 0.33 per cent, and, is probably the lowest in the world.
Since the devil is alleged to be in the detail, perhaps it is worth outlining how inflation has been cured. Consider the fact that in 1980, the bank notes that were in circulation in Zimbabwe were Z$2 to Z$20. The one Zim$ was equivalent to US$1.54. Annual inflation was about 5 per cent. Between 1994 and 2006, new notes ranging from Zim$50 to Zim$100,000 were issued for the first. In January 2008, the Z$1 million to Z$10 million notes were introduced and in near-perfect correlation, inflation (which later mutated into hyperinflation) ballooned to 100,000 per cent.Advertisement

From May 2008 to January 2009, notes ranging from Z$100 million to Z$100 trillion (plus 13 zeros, that were dropped off the Zim currency) were issued, and hyperinflation went beyond 500 billion per cent. Now, from over 500 billion per cent, the rate of inflation has taken a dramatic precipitation down to 0.33 per cent as of January /February 2014.
The above seeks to explain what caused the death of the Zim$. The Zim$ was simply killed by the printing press; that is to say, excessive printing of the Zim$. Every excess dollar printed caused a corresponding increase in inflation. Some may argue and cite political instability, and sanctions. But how come these factors are still there but today Zimbabwe has the lowest inflation rate in the world at 0.33 per cent. Something else is now missing: i.e. the printing press.
Having highlighted that the country, through its well thought out multicurrency system has managed to cure inflation, the focus should now shift to disinflation which is what the country is now experiencing. Talking about disinflation, it would seem that there is the usual befuddlement with the terms disinflation and deflation. These two are distinctly different and invariably have different results in a given economy.
Disoriented by the benefits of low inflation which is prevailing in the country, courtesy of the much-admired multicurrency system, malevolent observers have already began to predict that one of the twin evils of economics (inflation) will be replaced by yet another much more ominous evil, i.e. deflation. But the country is experiencing disinflation not deflation, stupid (to paraphrase Bill Clinton’s famous words).
Disinflation refers to the process wherein the rate of inflation is slower than its previous level. In other words, if the inflation rate drops to a lower level (.e.g. 2 per cent) than the previous rate of inflation (of say, 3 per cent), technically that difference is disinflation which is precisely what Zimbabwe is experiencing right now.  The key conditionality to note here is that in disinflation, prices are increasing (2 per cent), albeit at a slower rate relative to the previous month (of 3 per cent).
To illustrate the above: last month you bought eggs for US$10 and you sold them for US$10 plus 3 per cent profit. This month you bought the same pack of eggs for US$10 but you sold them for US$10 plus 2 per cent profit. From the foregoing, it is clear that in both cases prices have increased from US$10 but by different rates of increases, i.e. 2 per cent and 3 per cent respectively.
In contradistinction, deflation is the opposite of inflation; .i.e. prices of goods and services within the borders of a country are not increasing but are decreasing. Deflation manifests itself through “negative inflation”. You buy the same eggs at US$10 and you sell them at US$8. That is deflation. Deflation, of course has adverse repercussions for the economy. It leads to unemployment, bankruptcies, economic downturn, negative GDP, inter alia.
Consequently, Zimbabwe is experiencing disinflation rather than deflation. To cap it all, the disinflation that the country is experiencing is caused mainly by the increasingly weakening South African Rand which is the currency used by consumers in Zimbabwe to order goods from across the southern border. Simply put, they sell their goods in Zimbabwe earning US$s, which they then convert to Rands, getting more Rands, hence re-ordering their stocks cheaper in Rands (previously you converted US$1 =R8), now you convert US$1 = R12). In a nutshell, their stocks are becoming cheaper in Rand terms which they then pass on to their customers in the form of lower prices because their profit position has been compensated by the favourable exchange rate (which profits them as they convert US$S to Rands).
On the back of the foregoing, it is clear that what has been misperceived to be deflation has in fact been disinflation. In conclusion, the reduction of inflation from over 500 billion per cent in January 2009 to its current level of about 0.33 per cent is testimony to the death of one of the twin evils of economics in Zimbabwe. The question on the back of people’s minds is whether or not it has been buried.
Colls Ndlovu is an independent financial analyst and he writes in his personal capacity.