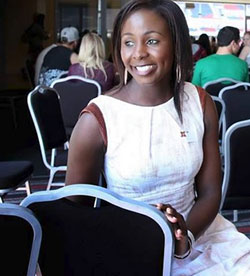 WHEN Tendayi Chivunga showed us why she was auditioning for the Australia’s X-Factor in Newcastle on Wednesday the whole room went silent.
The human rights lawyer from Zimbabwe was just one of hundreds of hopefuls trying their luck with the reality show that’s launched the careers of household names like Reece Mastin and One Direction.
Waiting at Hunter Stadium for her turn at the first round of auditions for next year’s show, she was joined by colleagues from NLS Law.
They’d shut down the office so they could support the 29-year-old – after all, it was her boss who persuaded her to audition after hearing her sing one day in her lunch break.
Chivunga said she had a very special reason for agreeing to this suggestion.
“Coming from a third world country, it’s not just for myself but for Zimbabwe,” she said.
“I do a lot of human rights law and I want to get the message out there about the issue through music.
“In my audition I’m going to sing ‘Respect’ by Aretha Franklin – to me it’s about respecting people and their culture.”
Although Chivunga’s powerful voice was only discovered by her workplace recently, she has been singing her entire life.
“When I was a girl back in Zimbabwe I would sing a lot in the churches,” she said.
It hasn’t been an easy journey for Chivunga to live in Newcastle and work as a solicitor.
Because of the political struggles back home she couldn’t afford to live in Australia anymore and study law.
She went back home for a period of time and put her ambitions on hold.
That was until some Australians in Newcastle got together and raised money to allow her to come back and complete her education.
Director of NLS Law Neisha Shepherd dismissed suggestions she could possibly be one of the nicest bosses ever.
“She sang in the office at lunch one day and her voice was so remarkable I said perhaps she needs to audition for X-factor,” she said.
“We rearranged everything to be here to support her.
“When she sings you just stop.”
THE AUDITIONS