Beatrice Mtetwa was part of the protest
Spread This News

Ngarivhume has been languishing in prison for 45 days after he was arrested on allegations of inciting the public to commit violence.

The politician was arrested on the same day with top journalist Hopewell Chin’ono who was also granted $10 000 bail hours after Ngarivhume was freed.

Lawyers, who were close to 30 in number, displayed placards written “Respect our Constitution” and “#ZimbaweanLivesMatter”. 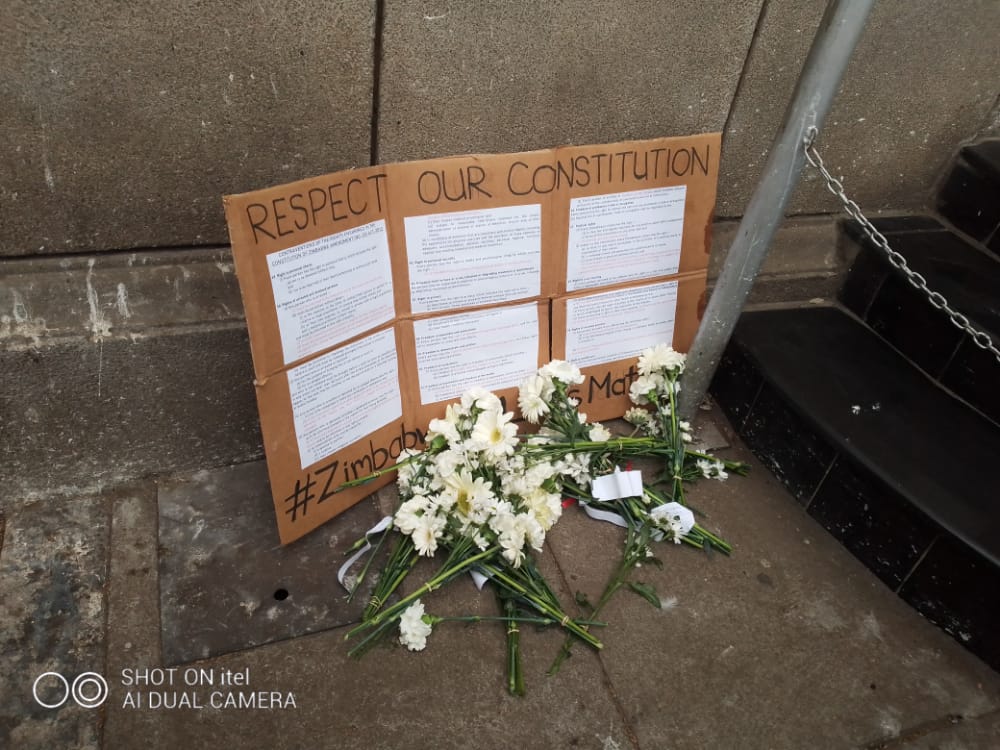 Also pasted on placards were Constitutional rights which they want respected and these include rights “of association, freedom of speech and legal representation” among other constitutionally guaranteed ones.

Each of the lawyers was carrying white roses and flowers with tags carrying different messages.

The protest comes at a time the President Emmerson Mnangagwa led government is under intense local and international criticism over alleged abuse of human rights.

Mtetwa was also recently barred from representing Chin’ono after prosecutors accused her of scandalising the courts.

Meanwhile, Chitapi said the magistrate who initially denied Chin’ono bail erred because there was no reasons to deny him his freedom considering that there were no reports of violence on July 31, the day that had been planned for national anti-government protests by Zimbabwean opposition and its allies.

“No reference to continuation of demonstrations was advocated for in the tweets from my analysis,” said the judge.

“The magistrate should have considered that the nation was on the edge regarding what was likely to happen on July 31. The day indeed came and went with no reports of violence, but the flopping cannot be attributed to the appellant because he did not lobby for it.

“Nothing was put in place to show that the day was for the commencement of the process (of demonstrations). So the magistrate misdirected in failing to find that the passing of July 31 was a changed circumstance,” Chitapi ruled.