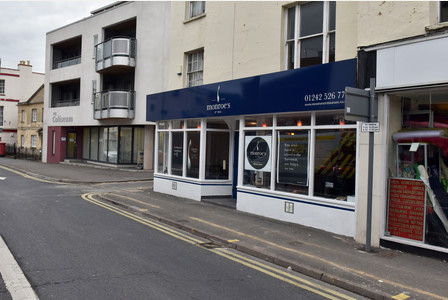 THERE is not long to wait until a new African restaurant opens its doors in Cheltenham.
Monroe’s, in Albion Street, has announced it hopes to welcome its first customers on Wednesday, November 23.
The South African restaurant has taken over the premises formerly occupied by Masala Bites, which closed in July.
Directors David McConkey and Dominic Madzimure say the vibrant orange decor has been replaced with a modern interior with white walls and blue accents and they are decorating it with African art and artefacts from their own collections.
Dominic, who was born in Zimbabwe, has had a long career in hotel and restaurant management and previously worked at Cowley Manor, near Cheltenham, before deciding to branch out on his own. David has moved from Northampton to join him in the venture.

David, who has also lived in Africa for 10 years, says: “It’s a very healthy cuisine.
“One of the big meats is ostrich which is farmed in Gloucestershire, so we can source that locally. It’s like beef but is much lower in cholesterol.
“There will also be venison, kudu and springbok, all of those deer that run around South Africa and make extremely good meat which we wanted to bring over to the Cotswolds and Cheltenham.”
David said the restaurant will also cater for vegetarians and people who love healthy food.