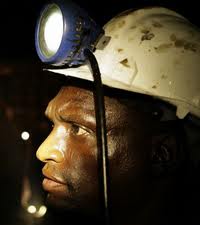 DECREASED metal prices have hit hard Zimbabwe’s mining sector which is expected to see negative growth for the first time in five years, a mining group said.
The Chamber of Mines said the sector would see negative growth rate of around -2 percent in 2014 due to challenges including falling metal prices, lower capital and foreign direct investment inflows, high production costs, unstable power supplies and inactive exploration activities.
The gold industry continued to face viability challenges while production of minerals such as platinum, diamond, chrome and palladium was expected to decline in 2014. Gold is the country’s biggest foreign currency earner.
The Chamber complained of high royalties charges, which it said were the highest in Africa.
Declining from 1,671 U.S. dollars per ounce to 1,140 per ounce between January and December last year, the gold prices, according to the mining group, are projected to remain depressed, ranging between 1, 000 U.S. dollars and 1,200 dollars in 2015.
Though the government reduced gold royalties from 7 percent to 5 percent last year, the continued decline in gold prices had eroded profits, the mining group said.
The group urged the government to further reduce power tariffs, royalties, and charges by Fidelity Printers and Refiners, a unit of the Reserve Bank of Zimbabwe.Advertisement