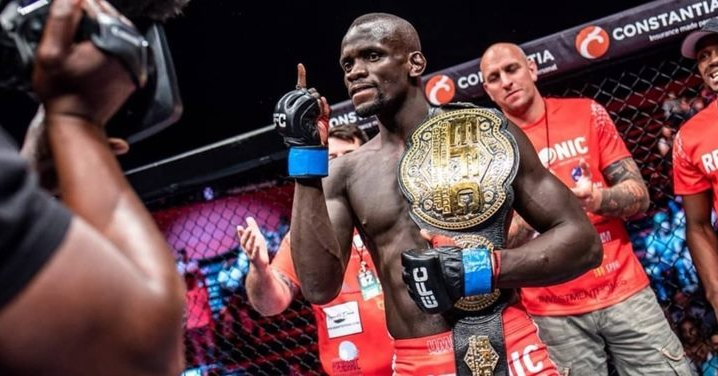 The South Africa-based duo who are both champions in their divisions in the EFC will be fighting in front of the UFC boss Dana White and if they impress it could convince the American businessman to sign the Zimbabweans to the world’s most lucrative MMA promotion company.

Chipfumbu, who captured EFC championship gold with a decision victory over Faeez Jacobs in his last bout at EFC 85 in May this year will feature in the main bout of the night when he battles Brazilian UAE Warriors bantamweight champion Vinicius de Oliveira.

A win will not only see Chipfumbu being crowned the new UAE Warriors bantamweight champion but also giving himself a chance to graduate to the UFC, which is home to the biggest names in the sport such as Conor McGregor, Khabib Nurmagomedov and Israel Adesanya just to mention a few.

“It’s a great opportunity for me that I will be fighting in front of Dana White. Millions of MMA fans will be glued to the fight,” said Chipfumbu, who is a former member of the Zimbabwe karate team.

“If you had asked me a week ago and I wouldn’t have thought I will be at the position I’m today. I can’t wait to add a second title, so come next week, I will be victorious.”

The UAE Warriors 24 in Abu Dhabi will also be an opportunity for the reigning Sports Person of the Year, Gorimbo to punch his ticket to the UFC when he faces Russian Ramazan Kurmagomedov.

Gorimbo hasn’t competed since defending his EFC Welterweight Championship belt with a second-round submission of Lyle Karam in March 2020 at EFC 84.

He believes the opportunity to fight in front of the UFC president is just the platform he needs to take his career to the next level.

“This is the stars aligning for me to get into the UFC,” Gorimbo said in an interview with USA Today.

“Fighting in front of Dana White was something that was supposed to happen on the Contender Series, and I did not get a chance to because of the visa situation. I believe that the stars have aligned for me to win in an impressive fashion in front of Dana to earn my spot in the UFC.”

Gorimbo, 30, grew up in Bikita, Masvingo and became an orphan after losing both his parents by the age of 13.

He fled Zimbabwe in 2008 for neighbouring South Africa after a life of mining diamonds in Marange as a teenager.

After overcoming several obstacles including being homeless when he arrived in South Africa, to become the best in the welterweight division on the continent, Gorimbo hopes to use his story to inspire others on the big stage.

“At the tender age of 16, I became a diamond smuggler in the bloody diamonds of Marange, Zimbabwe just to get by and look after myself,” Gorimbo said. “Eventually smuggling diamonds had to be stopped by the government, and I almost got killed there, and I left Zimbabwe at the age of 17 for South Africa as a border jumper in search of a better life and opportunities. I’ve worked as a painter, security, and gardener here in South Africa while doing MMA on the road to becoming a champion.”