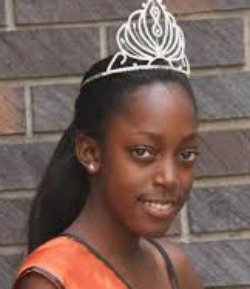 CANDA-BASED Zimbabwean model, Yollanda Chimbarami, is confident of rocking the World Championships of Performing Arts (WCOPA) and raise the national flag in Hollywood, United States.
The 19 year old who is studying Banking and Finance at the University of Manitoba in Canada said clinching a one-year contract with Panache Model Management of Canada made her optimistic about modelling and hopes to inspire many young people to pursue careers not only in modelling but in education.
In an interview with NewZimbabwe.com, from her base in Canada, the beauty queen said penning a deal with Panache Model Management was a milestone in her career that will afford her a chance to showcase her talent on the global stage.
“This is something inspiring as I seek to grow my career from strength to strength,” said Chimbarami.
“The modelling industry here (in Canada) is broad as there are vast opportunities in terms of shows and photo shoots that will help me hone my skills,” she added.
She said her first show will be on May 7.
“I am excited and nervous at the same time, as there are a few black African models from this side,” she said.
Chimbarami said she was also been selected to attend an all-expenses paid-for conference to be held in that country’s capital, Ottawa, from May 20 to 22 for her charity project called “Help A Child, Save A Nation.”
Having ventured into modelling at the age of 16, she became the youngest model to participate at the national pageant Miss Zimbabwe 2015 at the age of 17.
“My parents are my role models as they have taught me that the brain is the most powerful organ in a human body. As long as you believe in yourself, are focused and goal-oriented, you can do anything since nothing is impossible,” she said.
However Chimbarami has been focusing on commercial modelling which has seen her work with some of the best designers including Nigeria-based TIR brand owner Danielle Ellen and David Tlale of South Africa, just to mention a few.
Advertisement