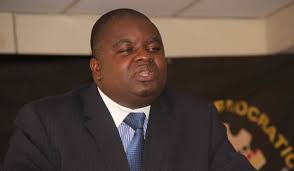 The MDC-T Secretary for Economic Affairs, Tapiwa Mashakada has called on the MDC Alliance to insist on a Presidential Transition Act (PTA) which he said would provide for a smooth transfer of power.

Writing in a paper titled “What the MDC Alliance should do to transform popularity to power”, Mashakada said although the situation on the ground pointed to the Alliance’s victory, there was a need to ensure a smooth transfer of power, which he said was difficult in Africa.

Mashakada said the PTA should be on the agenda of the meeting between the opposition and President Emmerson Mnangagwa.

MDC-T President and Alliance Presidential candidate, Nelson Chamisa has written to Mnangagwa requesting for a meeting to discuss the challenges bedeviling the country.

“In my view, the MDC Alliance should insist on the enactment of a Presidential Transition Act (PTA) which provides legal sign posts of a power transfer,” said Mashakada.

“Basically the Act will state what happens between the period after the last vote is cast and the swearing in of the President. It must never be left to the incumbent to use his discretion to announce the results, to call the opposition leader to a swearing ceremony and the audit and surrender of state assets and power,” he said.

Mashakada said the transfer of power was rarely smooth in African countries, adding the PTA would make legal provisions that provide timelines, thereby programming the process.

The Hatfield Member of the House of Assembly said the last two Alliance rallies in former Zanu PF strongholds of Murewa and Chiweshe had convinced him of victory.

He, however, urged the opposition to help demystify the Biometric Voter Registration, noting that the electorate was under the impression that voting was going to be done electronically.

Mashakada said rigging under the BVR process was difficult as there would be no ghost voters and slips, adding the opposition must concentrate on election management.

“So the people must be encouraged to register and vote and not think elections are already stolen by the BVR.

“…what the Alliance must concentrate on is election management: who prints ballots, how many? This has to be supervised by an audit firm and candidates should sign,” he said.

He said rigging could only be possible where there are no polling agents or observers or where the ballot paper would have been chemically treated together with the pen.