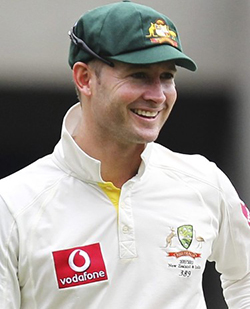 AUSTRALIA captain Michael Clarke has dismissed the idea that their tour of Zimbabwe might serve as a sort of extended audition for players keen to get into the squad before next year’s World Cup.
Australia’s 14-man squad departed on Wednesday for southern Africa, where they will play the hosts and South Africa in a triangular one-day series starting Monday in ­Harare.
With regulars such as the injured Shane Watson and rested opener David Warner not making the trip, Clarke’s squad includes a string of fringe players.
Clarke scoffed at the suggestion that the relatively low-key tour would provide Australian selectors with an opportunity to give them all a chance to display what they can do.
“It’s not a token tour. It’s about winning, so the selectors with [coach] Darren Lehmann will come up with what they think is the best 11,” he said.
“I’m certainly not there to give guys an opportunity. I’m in the business of winning.”
At the same time, Clarke said the likes of all-rounders Mitch Marsh and Ben Cutting, and seam bowler Kane Richardson, needed to grab their chances if they got them.
“I think they’ll see it as a chance to get a foot in the door, cement their spot, make it hard for the players that aren’t on this tour,” Clarke said.
“We’ve got a lot of talent, particularly in the shorter form of the game, and now these guys are getting an opportunity and they’ve got to grab it with both hands.
“Unfortunately, we’ve only got 11 spots and we’ve probably got 20 players who are ready to be a part of that 11, so now it comes down to consistent performance.”
Clarke has had a long rest since leading Australia to the 2-1 Test series triumph in South Africa that temporarily put his team top of the world rankings in the longest form of the game.
Clarke, 33, played through a broken shoulder during that series and said he was expecting South Africa’s pace bowlers to again target him with short deliveries in Zimbabwe.
“I think I’m probably going to get plenty of those before the end of my career,” he said.
“I think it’s going to be a tough tour. The wickets in Zimbabwe will be quite slow, there’ll be a bit of spin in them as well.
“We are in for a tough series and I think that these young guys will stand up.”Advertisement