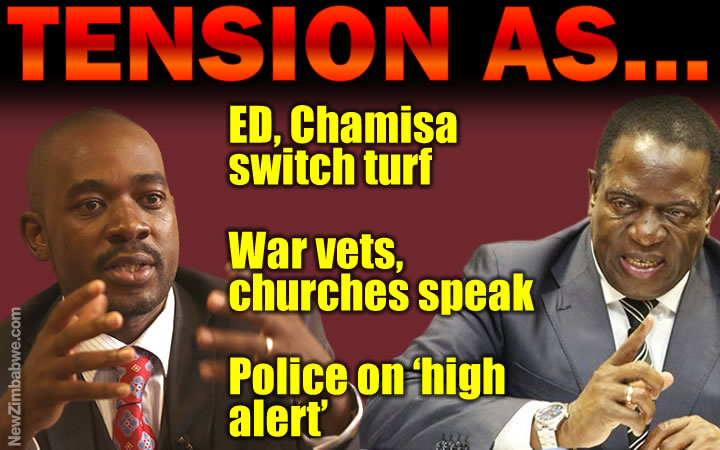 TENSIONS are high in Zimbabwe as the country’s political protagonists Emmerson Mnangagwa and Nelson Chamisa switch turf from the spiteful political arena to the Constitutional Court which sits this Wednesday to decide the country’s inconclusive presidential election.

The high stakes court process was triggered by a poll petition filed by Chamisa following the July 30 election.

The opposition chief, who polled 44,3 of the national vote, insists he was robbed of victory by the Zimbabwe Electoral Commission (ZEC) working in cahoots with the incumbent who was declared winner with a 50,8 percent of the vote.

However, the build up to Wednesday’s court process has been characterised by political gamesmanship which has seen posturing, threats and counterthreats among parties accusing each other of attempts to influence the court outcome.

Chamisa told the media on Monday Mnangagwa should swallow his pride and relinquish his job.

“He knows he lost and he should do the honourable thing; concede defeat. He and (Vice-President Constantino) Chiwenga should start negotiating their retirement packages and allow the people to move on,” he said.

The MDC Alliance leader has pulled all the stops to raise the stakes in the court battle, even hiring some top foreign lawyers and world jurists in attempts to increase international scrutiny on a court process which many believe could produce an outcome which favours the more powerful incumbent.

Similarly, Mnangagwa has implied the court process was a mere formality as his poll victory put him ahead of his main opponent.

Speaking in an interview in Namibia where he had attended a Southern African Development Cooperation (SADC) Heads of State summit, the 75-year-old said “I won the court case before it began.”

When asked how so by the journalist, he continued, ‘Yes, because if we have got an election it’s declared free and fair during campaigning, declared free, fair and transparent during voting.”

Apart from the protagonists, the state, churches and civic groups have played their part to ratchet up pressure on the bench to produce an outcome that favours their side.

A prayer meeting called by some local preachers was blocked by the police this week.

Police have moved to issue warnings against groups and activists who were planning to congregate outside ConCourt in solidarity with their parties.

War veterans Tuesday also vowed they were not going to countenance any reversal of Mnangagwa’s poll victory allegedly by the United States which they said was persistently interfering with Zimbabwe’s political processes.