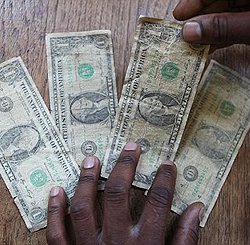 THE current debate about the possible return of the now-defunct but dreaded Zimdollar only serves to destabilise the country’s still fragile economy in general, and the financial sector in particular. Disoriented by the benefits of low inflation which is prevailing in the country, malevolent observers have already begun to jump up and down bleating for the return of the dreaded Zimdollar.
Some analysts have made even weirder suggestions that the return of the Zimdollar be linked to gold, alleging that this will be akin to returning to the gold standard monetary regime. While the nostalgia of the advocates of the return to the gold-standard monetary regime is understandable, their longing needs to be weighed against their amnesia about the miserable failure of the gold standard.
Firstly, the gold standard system was flawed because of the need to hold inordinate amounts of gold to keep pace with forces of supply and demand. The gold-standard monetary regime has a checkered history given its distinction as having partly caused the World War 2 by worsening the adverse economic impact of the Great Depression of the 1930s, which in turn catapulted one Hitler to power.
As pressure piled on the US government pursuant to the onset of the Vietnam War, former US president Richard Nixon, through the so-called “Nixon Shock” outlawed the gold standard, thus setting the stage for the global fiat monetary system. The fact of the matter with a gold standard monetary system is that countries simply ignore the supposed link between the value of the currency and gold by simply printing money to meet their financial obligations, particularly during crises. In practical terms the linkage remains on paper.
The question which arises is: why are nations like Zimbabwe that have opted for multicurrency systems experiencing the lowest inflation and good economic growth (Zim’s GDP growth has averaged 7 per cent since the adoption of the multicurrency system)? With Zimbabwe’s inflation bordering on zero per cent, the country has arguably the lowest inflation rate in the world. Riding on the back of its GDP growth, Zimbabwe is occupying its rightful place in the sun as one of the so-called African Lions (not to be confused with the Asian Tigers).
From the foregoing, new questions arise: did Zimbabwe make a misconceived ill-judgment by adopting the multicurrency system? Was Zimbabwe wise to decommission its own currency in favour of the multicurrency system? Given its distinction of having the lowest inflation rate in the world, Zimbabwe can now speak authoritatively on the subject of multi-currencies and the containment of inflation (having reduced its inflation from in excess of 500 billion per cent to about zero per cent).Advertisement

A number of economists also use Zimbabwe as a reference point for their theories on the benefits of multicurrency systems. One such economist is Prof Steve Hanke of John Hopkins University in the US. Former US Republican presidential candidate, Congressman Ron Paul, a perennial critic of the US Federal Reserve System (advocating for its dissolution) uses Zimbabwe as an example of a sovereign country that has no central bank that prints money or implements monetary policy. Ron Paul’s argument is that the Reserve Bank of Zimbabwe serves as a de jure central bank, but de facto, the country has no central bank that prints money and conducts monetary policy.  As a corollary thereof, he argues that the US Federal Reserve must also be abolished and/or outlawed.
In the 1970s, Nobel-prize winning Austrian economist Prof FA Hayek argued persuasively for the freedom of currency choice and de-nationalisation of money. He argued that the doctrine of free markets theory should be extended to the freedom of choice on currencies. It is a tribute to Prof Hayek that Zimbabwe’s then acting finance minister, Patrick Chinamasa introduced the multicurrency system 2009, and also abolished exchange controls, dealing in foreign currencies, as well as price controls. This is one area where Zimbabwe can lead the world, despite its numerous other self-inflicted problems. Notwithstanding the malevolent wishes of certain analysts, the multicurrency system has worked wonders in terms of curbing inflation and stabilising the economy.
Against the backdrop of the foregoing, the multicurrency system is a phenomenon that is bespoke to Zimbabwe in the global financial history. Hitherto, other countries (e.g. Argentina) have generally dollarised but the extent of their dollarisation had been limited to the adoption of the US$ per se while their local currencies were either pegged to the dollar or generally ignored by the markets due to the extent of their depreciation. Zimbabwe is the only country that has unequivocally adopted the multicurrency system under free market conditions, notwithstanding the government’s propensity to stifle freedom of economic activity.
Some analysts have previously stated that multicurrency systems were not suitable for developing economies, arguing that free floating currencies risk excessive exchange rate volatility. However, the multi-currency system has worked without any disruption except some alleged shortage of liquidity at certain times. But liquidity must be earned, in other words, money does not just fall like manna from the sky. The level of liquidity that is found in Zimbabwe is commensurate with the level of economic activity. Injection of excessive liquidity can trigger a financially adverse feedback loop in the form of higher inflation (excess money against the level of economic activity).
It must be emphasised that for dollarization to work, it must not only be permanent, but must also be seen to be so, in fact and in appearance. Money by its very nature is susceptible to volatility. By being a medium of exchange and a store of value, money is invariably a subject of endless scrutiny and speculation.
Zimbabwe has previously tried to peg its own currency against major currencies but such a misguided policy failed miserably. So bringing the Zimdollar and pegging it to the other currencies is a no go area. The success of any currency regime whether dollarised or not is ultimately dependent on sound fundamentals underlying such an economy. This must be read to include the rule of law which is the bedrock of any free market economy. The free market economy thrives on the integrity and validity of contracts, and, legal certainty in case of contractual disputes.
Admittedly, the multicurrency system is not without risks. Former US Federal Reserve chairman, Alan Greenspan once warned that while the US dollar currency circulating in a country like Zimbabwe is indeed credibly backed by the full might and credit of the U.S. government, any US dollar deposits made in countries like Zimbabwe are subject to the whims and caprices of the domestic government (Zim gvt) that could, “…with the stroke of a pen abolish their legal status.”
This assertion is very significant because it explains why deposits placed with domestic banks are a source of vulnerability for investors since they could lose their money should authorities decide (on political expediency, as they regularly and recklessly keep alleging that they might bring back the Zimdollar) to outlaw the multiplicity of currencies. Therefore, Zimbabwe needs to manage such fears by assuring investors that the multicurrency system is here to stay. As stated above, Zimbabwe must do so in fact and in appearance. In street lingo, the government must walk the talk.
In conclusion, it is now an established truism that the use of multicurrencies stabilises a country’s financial system. De-nationalisation and de-monitisation of the local currency eliminates the possibility of a sharp depreciation of the national currency. Because dollarisation tends to be accompanied by lower inflation, a dollarised country might also strengthen its financial institutions and create positive sentiment towards investment, both domestic and international. The foregoing therefore underscores the fact that, the Zimdollar should never be returned, “not in in a thousand years” (to quote a certain lunatic). The present multicurrency system is best for the country.
Ndlovu is an independent financial analyst and he writes in his personal capacity.