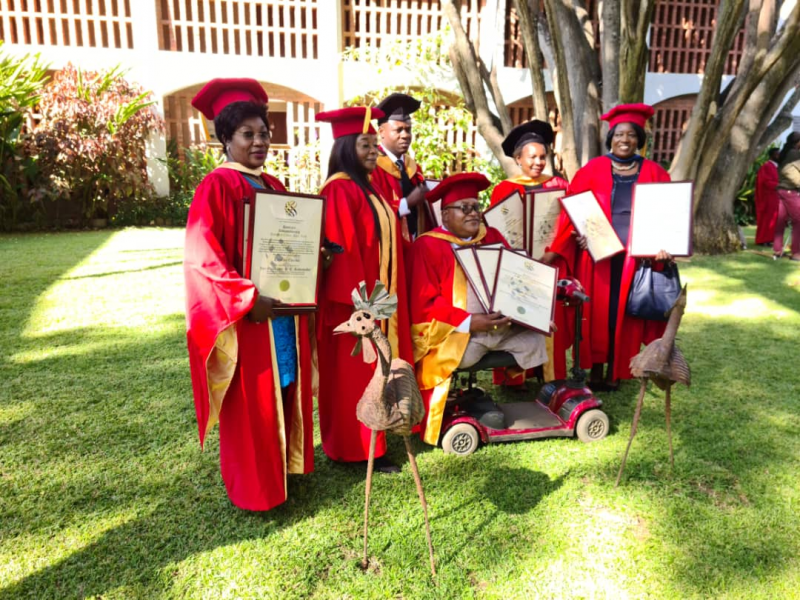 LOCAL philanthropists were Friday conferred with honorary degrees and philanthropic ambassadorship by the International Institute of Philanthropy (IIP) at a colourful ceremony held in Harare.

Among those who received recognition were prominent Midlands businesswoman Smelly Dube, Fatima Maruta, who runs an orphanage, Paul Shambare, Kudzanai Kujenga, Washington Mashunge, Agnes Mashunge, and Brian Zvarevadza among others.

Speaking to NewZimbabwe.com on the sidelines of the ceremony, IIP interim President for Southern Africa Enrico Maverick, who was the guest of honour, said many celebrated people died without receiving recognition for the work they did to help the disadvantaged members of society.

“IIP stands for people who have not been heard or acknowledged. IIP was attacked for honouring Oliver Mtukudzi in 2014. The late icon at the age of 60 had done tremendous work in uplifting the livelihoods of many people in Zimbabwe,” Maverick said.

“Many educated people of his age have not achieved this at all. He mentored and looked after many orphans and was also a Goodwill Ambassador of the United Nations Children’s Fund (UNICEF). Mtukudzi set up Pakare Paye (Arts Centre) and created employment, yet no university recognised him. They thought he was not educated yet IIP saw a gap in that and said how do you wait for such a man to die only to decide to honour him in death?”

He said it was sad to note that Jiri’s daughter was living in poverty yet his father sacrificed all he had for the betterment of those living with disabilities.

“Jairosi Jiri’s kids are walloping in poverty. His daughter is struggling and she is so poor. Jiri did so much for Zimbabwe. He sacrificed for others. We honoured him posthumously.  No one celebrated him whilst he was alive. Imagine if we had resources as a country? We could have helped his children or even given her daughter a piece of land.”

During the start of the national Covid-19 lockdown last year, Maverick told guests Smelly Dube donated foodstuffs to people in Gweru and surrounding rural areas as most Zimbabweans could not leave homes at the peak of the restrictions.

Fatima Maruta has adopted several dumped babies and is raising them as her own.

“Trucks were loaded with food and donated by Smelly Dube. Fatima Maruta takes care of dumped babies and adopts them. Today these women have been honoured and celebrated. They are making an impact in their communities,” added Maverick.

Dube told journalists she was brought up in a family where she was taught to give to those in need and since then, her passion and love for humanity had driven her to continue with the good deeds.

According to Maverick, IIP is present in more than 15 countries globally where people from all walks of life who have done and continued to do charity work are acknowledged.