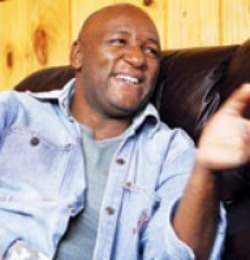 Award winning Zimbabwean playwright, Stanley Makuwe is making waves in New Zealand with his bare knuckle, hard hitting drama and will be performing his latest play, Finding Temeraire at the Basement, Lowe Greys Avenue in Auckland.
Makuwe who has become one of New Zealand’s top artists, premiered Finding Temeraire at the Harare International Festival of the Arts early this year. He was directed by British Director and Filmmaker, Agnieszka Piotrowska and had another show at the Mangere Arts Centre where he was directed by actress Irasa Siave.
The play unravels the human relationships against the backdrop of a small mining town in Zimbabwe.
The play features Zimbabwean actor, Tawanda Manyimo, (known for major roles in films such as Ghost in the shell, The Rover and Meg) and Sandra Zvenyika (In Transit).
“Although distinctive in location, voice and tone, Makuwe is excited about sharing this work with audiences here in New Zealand, a place he has called home for the past 15years.
“Makuwe is one of New Zealand’s quietly brilliant successes. Quite unassuming and modest, the forty-five year-old playwright has a swathe of awards to his name including Zimbabwe’s 2016 National Art Merits Award for Outstanding production and Outstanding director; the 2011 BBC International Playwriting competition and the 2005 BBC African short story writing competition,”
Makuwe, who has been living in New Zealand for the past 15 years, has also been shortlisted for the Playmarket’s Adam award, confirmation of his increasing global popularity.