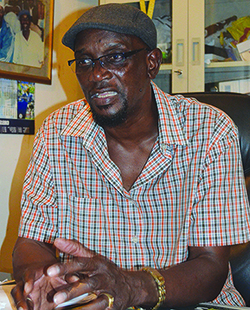 THE Premier Soccer League (PSL) has rejected Zimbabwe Football Association (ZIFA)’s attempt to “impose” Kenny Mubaiwa as the new chairman after the “suspension” of Peter Dube by soccer mother body.
PSL says it will not recognise the appointment of the Dynamos boss adding that the regulations that Chiyangwa used for his “appointments” do not give him “powers” to “appoint” office bearers for affiliates.
The Phillip Chiyangwa-led ZIFA had appointed Mubaiwa and ordered him to whip PSL into line, carry out an audit of league finances and investigate chief executive officer Kenny Ndebele who is accused of “sponsoring” and “fanning” division between ZIFA and PSL.
However, the PSL, through attorneys Coghlan Welsh and Guest, said it does not recognise Mubaiwa as its chairman.
“Article 34 Powers of the Executive Committee (e) shall appoint the Chairman, Deputy Chairman and members of the Electoral Committee and (o) may delegate tasks arising out of its area of authority to other bodies of ZIFA or third parties,” reads part of a letter from the lawyers.
“Article 34 (e) of the ZIFA Constitution relates to the appointment of the Electoral Committee established under that Constitution.
“It cannot be stretched to cover the appointment of the Chairman of an affiliate let alone an affiliate whose office bearers are appointed or elected in terms of such affiliate’s Constitution.”
The letter went on to say that the appointment of a chairman for the PSL or any affiliate of ZIFA is not one of the functions of the ZIFA executive committee.
The league told Chiyangwa that: “You have acted outside both your power and capacity in this regard. You cannot in short, delegate a power you do not have.
“The PSL Board of Governors remains extant and capable of executing its functions as such. It has not, seating as an electoral college in congress, elected Mr. Mubaiwa as its Chairman.
“The position remains as resolved by the Special Congress of the PSL, namely that pending the disposition of the matter relating to the status of its ‘suspended’ Chairman, the PSL shall be superintended over by the Emergency Committee established by Article 33 of its Constitution.
“The PSL Emergency Committee (with the exception of Uriri who has voluntarily withdrawn from all football-related administration functions regardless of his purported ‘suspension’, ‘reinstatement’ and ‘re-suspension’) remains capable of discharging its duties as such.”Advertisement

The league said its Chief Executive Officer is mandated by “resolution of the Special Congress to report to the Emergency Committee” and that he would continue to do so.