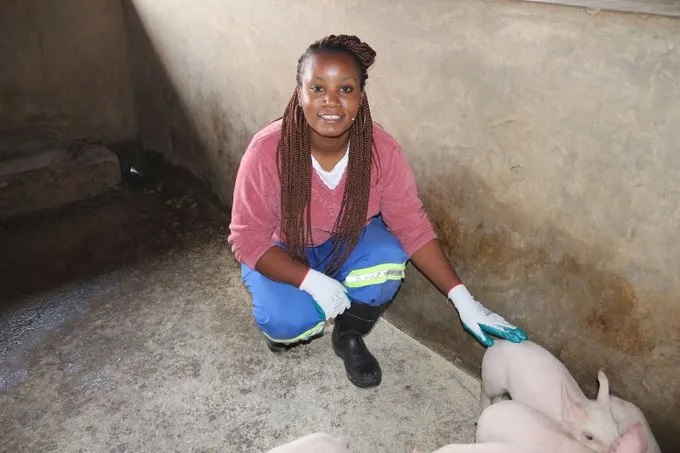 Zimbabwe’s pig industry is set for a boon as the US$45 million facility availed by the European Union (EU) in June 2019 to upscale subsistence producers to commercial stage is beginning to take shape.

Targeting 1,000 farmers in Mashonaland West and Mashonaland East provinces, the project had by the third week of January this year, attracted 734 farmers, 462 of whom are male and 272 female, indicating a 73 percent progress rate towards farmer enrolment, with women constituting 37 percent of the total.

Set to run for four years, the Zimbabwe Agricultural Growth Programme (ZAGP) was established to address the multitude of challenges currently affecting pig producers in Zimbabwe.

These challenges include reliance on inferior breeds, unavailability of funding, high feed and drug costs, persistent droughts, high cost of compliance, lack of skills, insufficient extension services, and policy bottlenecks. The initiative is designed to address these bottlenecks by enhancing production and productivity, easing access to viable markets and improving breeds.

The ZAGP will benefit not only the pork value chain, but also the beef, poultry, dairy and goat sectors. The pig project, alongside goat, is running under the banner, Value Chain Alliance for Livestock Upgrading and Empowerment (VALUE), with international NGO, ActionAid, backing the campaign.

ActionAid team leader for the ZAGP VALUE project, Newton Chari says the initiative will go a long way to addressing the viability challenges that pig farmers are facing and serve as a launch-pad for them to commercialise.

“Given that women play the primary role in small livestock production, they will constitute 60 percent of all the farmers targeted by the project while young men and young women will constitute the remaining 40 percent,” he explains.

Pigs are considered highly susceptible to mycotoxin contamination, with young animals and female breeders being the most sensitive groups. Mycotoxin can cause clinical symptoms or subclinical decreasing animal performance leading to great economic losses.

“We want to improve commercialisation in the country and this has to be done through the investment, which is also coming into the project. So, we really believe the model works and will improve the sow herd in the country both with improved genetics and organising the farmers themselves because if they are organised they can even import more genetics as well, to support their whole production,” he said.

Pig farming in Zimbabwe is very small with a sow herd just above 20,000 said Chari. He however, expects the EU initiative to help grow the herd.

Since its official launch in June last year, the VALUE project has seen the establishment of pig producer business syndicates (PPBS) in Mashonaland East and Mashonaland West provinces. The PPBS will have business management units that will drive the development of viable pork value chains for the farmers.

The two high-rainfall provinces were chosen because they already have high levels of piggery activities. Farmers will also be able to access the required raw materials, especially maize and soya, which are important ingredients in pig feed.

According to Chari, farmers will share 230 breeding stock of Large White, Landrace and Duroc – 200 gilts and 30 sows and boar grandparents – which were sourced from one of the world’s leading pig breeding companies, Danbred, in South Africa and were expected in Zimbabwe by the end of January.

The new breeds are expected to be a game changer for the local pork industry as they farrow more. Instead of getting nine to 10 piglets, which is the average with most Zimbabwean breeds, the new animals can farrow between 18 and 20 piglets.

The breeding stock will be raised at two farms Shamiso and Bradford in Mashonaland East and Mashonaland West province respectively. The two farms are designated as the pork value chain integrators under the VALUE project.

One of the young female farmers who was picked to benefit from the VALUE project, Kimberley Nyatanga, said the harsh economic situation in the country is adversely affecting the business that she runs with her husband in Marondera in Mashonaland East Province. Having already survived a difficult economy with no support, Nyatanga is optimistic that the EU facility will drive her business.

She expects the project to improve her business in the areas of breeding stock, market access and better producer prices.

“The consortium will improve business linkages from input and acquisition logistics to marketing and after-sales services,” says Nyatanga.

On the prevailing producer prices in the country, the young farmer said they were not viable as the market structure is dominated by a few wholesalers and retailers who set the prices when buying, thereby creating an oligopoly.

“The situation is actually unforgiving for the farmer because it is not us who determine the price but the market,” she told The Pig Site.

“It will not take into account the production costs involved and in the end you break even, run a loss or get a very negligible profit which might make it difficult to continue producing the product. These prices are mostly unviable and the farmer has no choice but to engage.

“This [EU] programme, as it promises, should be able to bridge the gap by organising farmers and bringing collective effort to attain better prices for their product through collective bargaining agreements led by the business management units of the consortium. It can further facilitate market and product development strategies that may increase pork product uptake and create demand, thus improving prices.”

Nyatanga and her husband Brian have 12 sows and one boar servicing all their females. They also have 56 piglets, 29 weaners, 96 growers and are expecting a minimum of 50 piglets from their pregnant sows this February. They expect to buy four gilts as well.

“Our breeds are crosses of Danish Landrace, Large White and Duroc. We are currently achieving a farrowing index of 2.45 producing an average of 12 pigs per sow per farrowing,” she said.

Zimbabwe is facing a serious electricity load shedding due to low generation and frequent vandalism of power transmission infrastructure. Recently, a six kilometre stretch of the power line to Nyatanga’s farm was stolen. She plans to invest in a biogas digester as an alternative energy source to keep her operation going.

She said: “The biogas digester will work to warm up our piglets, making sure that we will not have any losses due to the cold. It will also serve to save our environment as for now we have to resort to firewood to warm them up.

“It will also assist in lighting up our pens during the night for our workers on night shift assisting piglets during feeding. Our workers will also benefit as they will use the energy generated to cook and for lighting. Vaccine storage will be easier as the biogas digester will enable us to run refrigerators. The biogas digester would also save on electricity costs and give us continuous guaranteed availability.”

Responding to questions from The Pig Site at the January 22 press conference in Bulawayo, EU Ambassador to Zimbabwe, Timo Olkkonen was upbeat about the prospects for commercialisation of the pig value chain.

“The ZAGP is a different kind of programme. It is trying to address the commercial side of turning (pig farming) into a vibrant sector that contributes more to the economy,” he said.