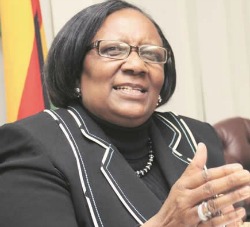 Zimbabwe remains one of the world`s most expensive tourist destinations and there is need for stakeholders to review the prices if the country is to attract international and regional tourists, minister Prisca Mupfumira said.
The minister of tourism made these remarks while addressing Hospitality Association of Zimbabwe (HAZ) congress this week.
“The question still remains: are we not prejudicing ourselves? We need to do something to review our price regime if we are to shrug off the tag of being the world`s most expensive tourist destination,” she said.
Mupfumira said the country`s tourism sector has gone through challenging seasons which has greatly impacted on its competitiveness.
She, however, said there has been renewed confidence following positives recorded in hotel occupancy which has increased to 65 percent for city hotels, while resorts have recorded 55 percent.
“Hotel occupancy has increased as a result of renewed confidence. However, our main focus is to aggressively market the Eastern Highlands whose occupancy remains at 40 percent,” said the minister.
Mupfumira said the lack of uptake in domestic tourism has been a major weakness resulting in the industry`s poor performance during the time when the country experienced isolation by international community.
“This is attributed, primarily, to low disposable incomes and absence of a travelling culture amongst locals,” said the minister.
Mupfumira said the performance of the tourism sector in the country over the last few years has taken a positive turn, anchored by the iconic Victoria Falls and the commissioning of the new airport in December last year.
“Room occupancy in Victoria Falls has increased by 25,4 percent for the six months ended June 30 2017 as compared to same period in 2016,” said Mupfumira.
She added: “Infrastructure development is an enabler for continual
growth of the sector”.
According to United Nations World Tourism Organization (UNWTO), Zimbabwe is ranked 19th out of 134 on natural attractiveness index.Advertisement