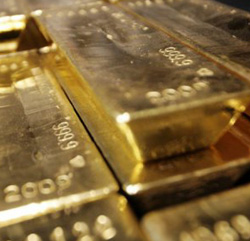 ZIMBABWE intends to seek re-admission into the London Bullion Marketing Association (LBMA) by the end of the first quarter this year, a senior government official said on Friday.
The LBMA is a wholesale market for the trading of gold and silver.
The development follows the resumption of gold refining by Fidelity Printers and Refineries in December last year to become the sole buyer and exporter of gold in Zimbabwe effective Jan 1, 2014.
Zimbabwe’s membership to the LBMA was cancelled in 2008 after it produced three tonnes of gold, falling short of the required minimum of 10 tonnes per year.
Since then, the country has been sending its gold for refinery and marketing to Rand Refinery of South Africa.
But production is picking up with 14 tonnes of gold having been produced in 2012 while 2013’s target was set at 17 tonnes.
Mines and Mining Development Permanent Secretary Professor Francis Gudyanga said the government would be implementing various measures to ensure that all gold produced in the country is channeled through Fidelity Printers and Refineries.
He said some of the measures included partnering relevant stakeholders for example the Zimbabwe Revenue Authority to curb gold smuggling.
“We are putting in place new measures, by the end of the quarter we would have established a pattern, it is a tall order but I think it is achievable (to regain LBMA membership) with all these measures that we are putting in place,” he said.
Professor Gudyanga said Fidelity Printers and Refineries was in a sound financial position to buy all the gold produced locally.
“Money to buy (the gold) will not be a problem, money will be found that is not the problem, the main problem is to ensure that illegal transactions of gold are minimised that is the major issue.
“The point is that they have the money to buy from all the licenced producers, it is their observation that many of those who do not have licences prefer to sell their gold to other buyers and this has nothing to do with competitive prices it is just that they try to avoid taxes which would be incurred when they go through the formal channels.”
He said Fidelity was also aiming to build gold reserves of up to 10 tonnes.
Gold trading had been liberalised in 2009 after Fidelity had ceased operations in 2007 as production dipped sharply.Advertisement