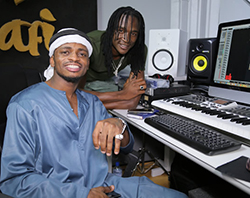 ONE of the biggest highlights from Saturday night’s MTV Africa Music Awards was seeing Zimbabwean singer, Jah Prayzah, walk away with a “Listener’s Choice” award.
Prayzah has had a fantastic year, which included recording a video with Diamond Platnumz for their song “Watora Mari” but even he was surprised to hear his name called out at the MAMAs.
The artist became the first ever Zimbabwean to win an MTV award, making this a truly historic feat for the singer.
He spoke with pride when he said: “It’s an honour to have that award and when my manager came breaking the news to me, I was so excited!
“Even our performance changed. Unfortunately, we could not afford to cancel four shows on the day to attend the ceremony.”

Meanwhile the multi-award singer has apparently released a tribute song for the Zimbabwe Warriors ahead of AFCON 2017 in Gabon next year.
The single features commentary from respected radio and TV commentator Charles Mabika and is entitled “Handei MaWarriors”.
In the song, Prayzah praises the senior national team as an indomitable football force that is set to crush everything in its path.
He even suggests they are capable of winning silverware when they take on the continent’s best teams in Gabon next year.
Mabika, who also anchors the Game Plan football magazine show on ZTV on Monday nights, takes his fans back to the days when he was a football commentator on local radio.
“Ladies and gentlemen, please welcome the only team from Southern Africa to the 2017 Gabon African Cup of Nations finals tournament, the Warriors of Zimbabwe,” Mabika thunders in the opening remarks in the song.
Jah Prayzah in the song says the Warriors have become such a formidable force that their opponents tremble whenever they face them.
He then hails the Warriors for qualifying for the finals, with a game to spare, before he does some commentary on an imaginary game in Gabon featuring the team.Advertisement