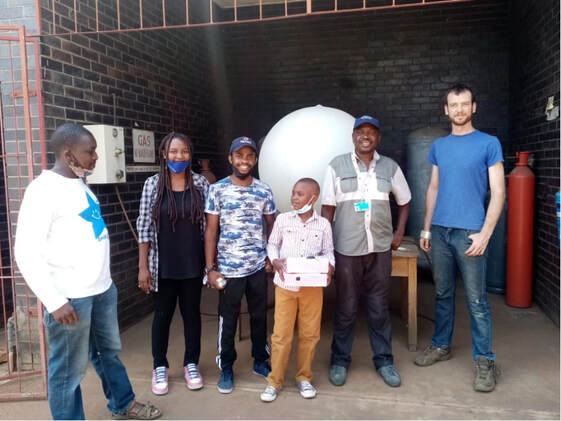 HIGH Altitude Balloon Discover Mission (HABDM) is the first space student-led project that has been done in Zimbabwe.

The project was a collaborative engagement project between students from the Students for the Exploration and Development of Space Zimbabwe (SEDS Zimbabwe) and the Meteorological Service Department (MSD) of Zimbabwe.

The purpose of this mission was to spearhead space education in Zimbabwe and ensure that students are aware of the opportunities that space has. Our primary goal was to record the flight to the stratosphere and use that footage for educational purposes as well as celebrating World Space Week.

Prior to the launch date, we decided that we would send our payload together with a radiosonde from the MSD so that we could compare the atmospheric information obtained.

To add to the mission, we covered the capsule pink acknowledging that the month of October is the month for breast cancer awareness. It only took us three days to have all the equipment for the payload.

Despite the risks involved and the probability of failing to recover our instruments were high because we did not have enough time to prepare. We had seen videos of well-prepared teams who had done high altitude projects facing some challenges in recovering their payloads when they were using state of the art equipment.

So in our case to avoid too much disappointment we had to lower our expectations and accept any outcome.
​
On the 10th of October, the whole team met at the MSD offices, and without wasting time the balloon was launched. We were graced by the presence of the Deputy Director of MSD Zimbabwe, Mr. Mazhara.

Unfortunately, on the launch, the weight of the payload posed a huge challenge. We ended up removing the radiosonde to ensure that the balloon ascended to the stratosphere. Our payload consisted of two cameras, a mobile device, a USB adapter, a power bank, and a data logging system.

The team consisted of students from the University of Zimbabwe and the National University of Science and Technology Zimbabwe, with assistance from Claire a geography teacher at St John’s College in Harare, and William, a self-employed space enthusiast. It was through the collaborative effort of the team that we were able to have all the resources that were needed for the launch. The MSD came through for us by providing us with the balloon and hydrogen gas. 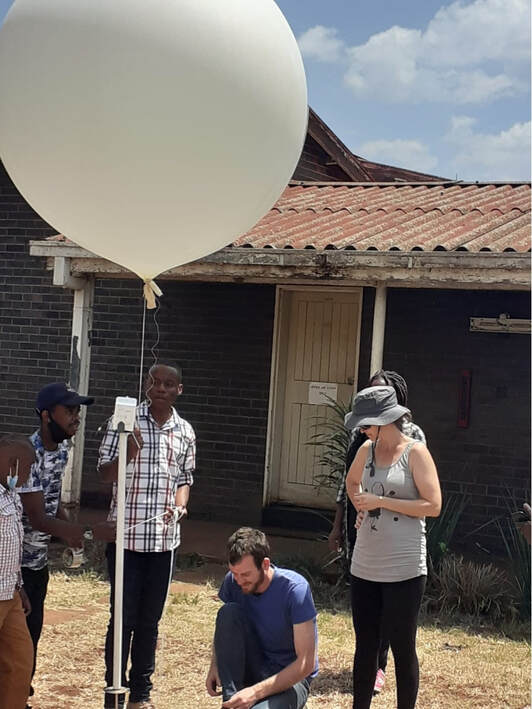 After our successful launch which saw us being the first individuals to conduct such a project in Zimbabwe, the hunt for the payload started. We immediately started to track the payload and for the first 30 minutes into the flight our GPS was working and then it stopped sending its pin location.

From there we just started driving to the expected landing area that we had predicted using predict.habhub.org. We drove to Marondera which was about 75 km from the MSD offices and at this point in time we were just following blindly without receiving any information from the payload.

We waited for three hours. After waiting for three hours it was clear that we had lost the payload either because the mobile device had lost network or it froze. Just as we were about to drive back home we received a pin location in Goromonzi area and this was the turning moment of the whole mission.

The pin location that we received was 49.4 km from our current location. We managed to drive to the place and it was in the middle of a thick bush with tall grass which made it very difficult to search. To add to the challenges that we had to manoeuvre in the thick bush the network connection was bad and we lost the live location of the payload.

​It took us about two more hours of searching up to a point that we just gave up and decided to return back home. It was already getting dark we were hoping to regroup and recharge our devices so that we could give it another try the following day.

Once we arrived at our base camp, we received another pin location which was sent earlier and we did not receive it because of the network connection. On the next day, our hopes were high but to no avail, we could not locate the payload. At this point, we had done all that we could and it was time we just accepted that we could not recover the payload.

Later in the day we then received a call from an individual claiming that he had found something hanging from a tree and he managed to get contact the details that were on the capsule. We could not contain the excitement.

So, we decided to travel to collect the payload the following day because it had landed in Murewa which was quite far away from the current pin location we had. For a first-time launch, locating the payload was just a bonus point to us and above all, we enjoyed the adventure of spending time in the bushes on a mission that seemed to be impossible.

The HAB Discover Mission gave us the platform to learn and we believe that sharing that experience will definitely motivate someone to keep searching for their ultimate goal in life despite the challenges that they meet. It is our hope that this is just a start of many other space projects that we will do.