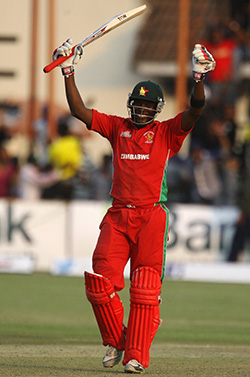 Zimbabwe 211 for 7 (Chigumbura 52*, Lyon 4-44) beat Australia 209 for 9 (Clarke 68*) by three wickets
CAPTAIN Elton Chigumbura hit an unbeaten half century as Zimbabwe defeated Australia for only the second time in a one-day international.
Zimbabwe, chasing 210 for victory, won with 12 balls to spare to claim a famous three-wicket win in Harare.
It was the team’s first ODI win over Australia since the 1983 World Cup, their first ever meeting.
Since then Australia, world champions four times, have won 27 meetings, with one match abandoned.
However, Zimbabwe won on the only occasion the sides have met in Twenty20 internationals – a five-wicket success at the inaugural ICC World T20 in 2007.
Sunday’s match was the fourth game in a triangular ODI tournament that also features South Africa – and Australia won their previous match against the hosts by 198 runs.

Celebration … The Zimbabwe players take a victory lap around the ground