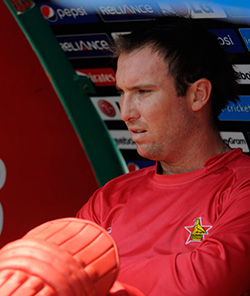 MAJOR changes were announced Thursday by Zimbabwe Cricket (ZC), with test skipper Brendan Taylor losing the one-day role and coach, Andy Waller, taking up the newly-created director of coaching role.
The changes came on the day Zimbabwe suffered a crushing 100-run defeat by Afghanistan with the ODI series ending in a disappointing 2-2 draw for the home side.
Commenting on the defeat, former education and sport minister David Coltart said the local game had hit rock bottom.
Writing on his Facebook page, Coltart said: “We have to face it – being thumped by Afghanistan is arguably the worst day in Zimbabwe’s cricket history.
Taylor’s replacement in the ODI and Twenty20 format was Elton Chigumbura while assistant coach Stephen Mangongo moved up to replace Waller, whose last game in charge was Thursday’s defeat.
Mangongo led the side as caretaker last year before the appointment of Waller.
”The board decided to create the position of national director of coaching responsible for development of cricket from grassroots and grooming of coaches,” a ZC statement said.
”Andy Waller was appointed to the position with immediate effect up to the end of his current contract and subject to renewal.”
Mangongo’s first task would be to prepare the team for a one-off home test against South Africa starting on August 9, before Zimbabwe welcome Australia for a triangular ODI series also involving the Proteas later in the month.
Long-serving ZC chairman Peter Chingoka also stepped down on Thursday after 22 years at the helm of the game in the country.
Commenting on the changes Coltart said: “I think the state of the game of Zimbabwe cricket after (Thursday’s) Board decisions is aptly summed up in the way they played (against Afghanistan).
“Chingoka’s exit from Zimbabwe Cricket is nothing to celebrate given he’s been replaced by Manase who, whilst a nice guy, has never played the game.”

Stepping down after heading cricket board since 1992 … Peter Chingoka