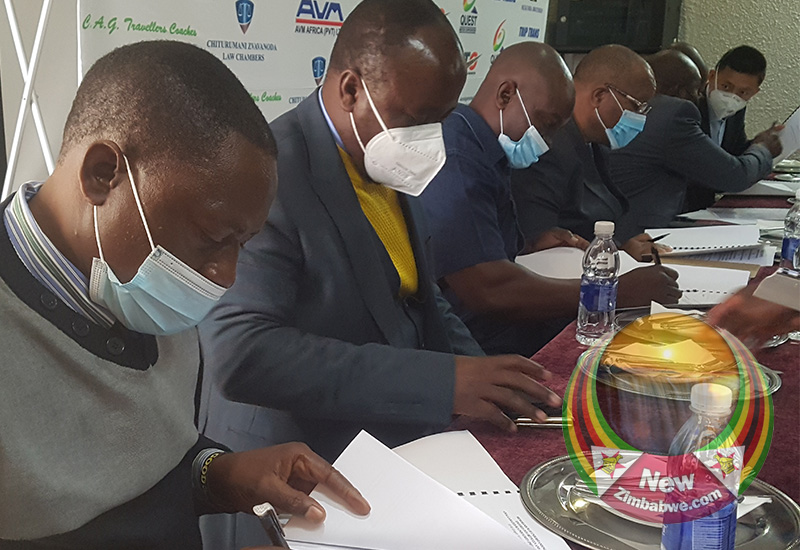 Company representatives during the MOU signing ceremony
Spread This News

ZIMBABWE is set to become the second SADC country and also part of a countable few in Africa with bus manufacturing and assembly plants when it launches its own next month.

The plant, a partnership between Amalgamated Bus Industries, Quest Motors Manufacturing, AVM Africa and China’ Zhongtong Buses, will start operating next month with a target of 500 buses per year.

“We are implementing the programme from July 2021 to June 2022 with a minimum of 500 buses for the local market; then going forward, we will be looking at the regional market,” said Sibanda.

“As you might know in SADC, outside South Africa, it is only Zimbabwe that has companies that are capable of assembling buses. So, we are looking at Zambia, Malawi, Mozambique, Tanzania and DRC.

“Currently, the bus industry as fragmented as it is, has an estimate of 21 000 jobs. Now, if we start assembling buses, just in the plants, we are looking at 10 000 jobs combined.

“Manufacturing ignites secondary industries, when you assemble, you now need batteries, windscreens, tyres, seats that you must manufacture locally.”

Zimbabwe used to assemble cars, buses and trucks locally, but poor management and heavy economic knocks have resulted in firms shutting down.

Most privately owned buses operating locally have had to be imported from countries such as Japan and China with government sourcing its own fleet from Belarus in recent years.

“Yesteryear, we used to build buses locally but currently, we are importing Completely Built Ups (CBUs) whilst we have the expertise to build these buses locally.

“As operators, our responsibility is to move passengers. It is of paramount importance that we take this pragmatic step to make sure buses are manufactured locally.”

Nhanhanga said he was looking forward to the revival of downstream industries including manufacturers of batteries, screens and seats who will benefit from the development.

“We should be able to reduce foreign currency needs by at least 20 percent,” he said.

“We believe that within the sector, we will be able to source our own funds and procure all the required resources to revive the local bus assembling sector.”