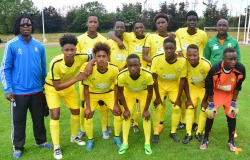 THE Zimbabwe UK Under 17 were on Monday crowned the UK AFCON champions after they beat an experienced Moroccan team 3-1 on penalties after drawing 1-1 in 90 minutes.
The final was played at Terrence Macmillan Stadium in London in front of a sizable crowed. The Young Warriors are composed of UK based professional players and academy players assembled by Team Zimbabwe UK into a national team barely 3 months ago.
The team sent shocking waves into the tournament after eliminating holders Nigeria 2-0 in the semi-finals in a game seen by many as the best of the entire tournament. Nigeria played 3 players that won the FIFA Under 17 World Cup last year.
In the group stages, the Young Warriors emphatically dismissed Somaliland 8-4 and Angola 1-0 to top the group with deserved 6 points. The tournament was graced by many football scouts from the UK, Spain and South America. After the tournament three young warriors were invited for trials by two premier league clubs.
In the cup final Zimbabwe outclassed and outshined an experienced Moroccan team that had been playing together for more than 2 years.
The Warriors dominated play from the first minute, keeping the ball well with forward movement and intricate one touch passes which resulted in a beautiful 13th minute goal scored by Ryan Makwenge of Coventry United.
The move was engineered by outstanding midfielder, Wilson Chingoka, who was also voted man of the match by the tournament sponsors, Royal Air Moroc. Chingoka was combative in midfield and also scored a fantastic penalty in the shootouts.
Twin brothers Simbarashe (goalkeeper) and Kudakwashe Mdianyama were also a joy to watch. Simba saved one penalty and did the Bruce Grobbelaar antics which led to Morocco missing 2 penalties. Panashe, Wilson and Shay converted from the spot for Zimbabwe, prompting wild celebrations and a pitch invasion from the supporters.
Captain Seth Patrick of Northampton FC was outstanding throughout the tournament. He led well both on and off the pitch. His imposing figure, skill on the ball and ability to pass long range and convert from set pieces made him the player of the tournament.
Sadly, Leeds based Arnold Ndiweni “George Shaya” missed the final due to club commitments in Scotland. The little magician was a joy to watch in midfield, as he wowed the crowd each time he touched the ball exhibiting fancy foot work.Advertisement

Tyrone Sibanda, another academy player, also missed in the final due to injury.
Giant Striker, Paneshe Roberts, was amazing, scooping the golden boot with six tournament goals which included a hat trick against Somaliland and the goal of the tournament-a wonderful 25 yard strike against Nigeria in the semi-finals.
Head coach, Chamu Musanhu, and Team Manager, Trevor Mazhande, were full of praise for their team. They cited hard work, discipline and good organisation as key to the team’s success. Both Mazhande and Musanhu are now attached to premier league clubs West Bromwich Albion and Everton FC respectively. They played a unique 4-2-3-1 formation which suffocated opponents by starving them of the ball in midfield and automatically ignited fire upfront when the three midfielders sporadically joined  the lone striker upfront when in possession of the ball.
Team Zimbabwe UK CEO Marshall Gore said “There is hope for Zimbabwean football if the Diaspora talent is well scouted, harvested and included in our main national teams.”
Gore, who is also the Chairman of the African Football Association, the organisers of the tournament, said there were on-going talks between Team Zimbabwe UK, ZIFA and the Ministry of Sports and Recreation aimed at synergising Zimbabwe Diaspora Football Development Strategy with local football development plans in the country.
“We’re also planning to tour Zimbabwe next year to present to the nation some of our talented footballers not yet known inside the country,” said Gore.
In the build-up to the tournament, both Zifa President Dr Phillip Chiyangwa and Sports Minister Mkhosine Hlongwane sent messages to Team Zimbabwe UK wishing them the best of luck in representing the country.
Team Zimbabwe UK Chairman, Liberty Masunda, also a former national team player, thanked the Zimbabwe UK Diaspora community for coming out to support the team in large numbers throughout the tournament. He also thanked the project sponsors, Virtual Media Technologies, Greenshoot Specialised Care Services Limited, who were represented by director Charles Murape at the final, and Flexi Coventry Limited who were also represented by director Felix Marufu.
Zimbabwe UK was also supported by broadcasting partners Pamutengo Radio and E&N Design’s photography, the company that took the official pictures of all the young warriors’ games.
Project Administrator, Thomas Thomik, said players’ welfare was priority at the tournament.
“All our players stayed in a hotel during camp and they were paid their agreed winning bonuses soon after the match. We have won today but we’re not relaxing. As we celebrate, we’re also start to plan on defending the trophy next year and embarking on our fundraising mission for the trip to Zimbabwe scheduled for July 2017,” he said.
Regulated by the English FA and organised by the African Football Association, the tournament has been running since 2006.