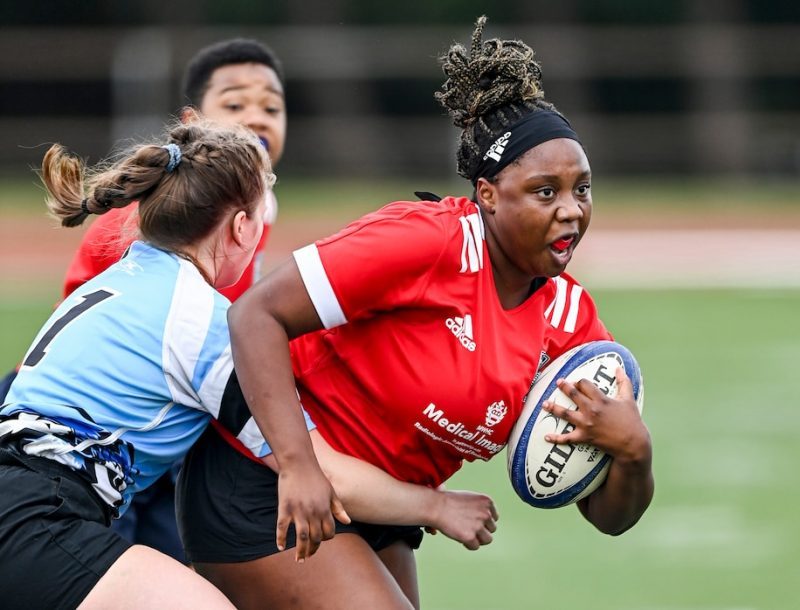 TAKUNDA Rusike has long been familiar with rugby. She learned about the sport through her cousins and uncles who played in Zimbabwe, including one uncle who represented the national team.

It wasn’t until she was a junior in high school, though, that Rusike began to play herself, joining a club team after her field hockey coach suggested her physicality would be less proscribed in rugby.

Three years later, Rusike, 19, has created a club team at Howard — just the second women’s squad at a historically Black university — that has ambitions of obtaining varsity status. Her efforts coincide with a broader push to make the sport more accessible to African Americans in the Washington region and more popular around the country.

“It’s growing, and there are definitely more Black women getting into the sport, but when I was playing in Maryland in high school, there was not many Black girls,” said Rusike, who attended Towson High. “I would really love to create a program where years down the line there are little Black girls who know, ‘I love rugby, and I can play it at Howard.’

The idea of starting a Howard rugby team would have been foreign to Carille Guthrie when she was in school two decades ago. Guthrie enrolled at Howard in 2000 after transferring from Tufts University, where she played for the school’s team. Without a program in place at Howard, Guthrie never considered starting one, so she joined a local club team called the Maryland Stingers instead.

Since she graduated, she has played at the club level and coached at the youth level, using the sport to connect with people as her career — she works as a contractor for the State Department — took her from Houston to Kyrgyzstan and now Sri Lanka.

When the coronavirus pandemic took hold last year, it led her to a Facebook group for rugby players who are Black, Indigenous or people of color in which some members began floating the idea of starting more rugby programs at HBCUs.

Those intentions materialized into the James G. Robertson and Clive Sullivan Rugby Foundation (RSRF), which aims to develop men’s and women’s teams in the D.C. area.

The group draws its name from two pioneering Black players: Robertson is believed to be the first Black rugby player and Sullivan was the first Black captain of a major British sports team.

The RSRF is focusing on Howard, Morgan State, Bowie State and the University of the District of Columbia and could expand to other regions.

“I travel a lot, internationally and domestically, and whenever I move to a new city I find the local rugby team, and that’s automatically my new group of friends, my new family,” said Guthrie, who is president of the foundation.

“I had a smidge of that experience in college, but because I was with the senior women [on her unaffiliated club team], we weren’t really as bonded as it would have been with a college team. I just want the college kids to get that experience from the jump. … They’ve got the athletes. The talent is there on campus. They just need to be provided with the opportunity to play.”

That opportunity could not have come at a better time for Rusike, who had been struggling with her mental health after the pandemic shuttered activities and in-person classes at Howard.

Rusike also played basketball and soccer in high school, but after she fouled out enough times and collected yellow cards often enough, she was persuaded to try rugby.
She joined her Baltimore-area club team and took an instant liking to it. She eventually attracted the attention of college coaches but chose to attend Howard, seeking to avoid the microaggressions she had experienced in high school.

Washington’s pro rugby team, Old Glory DC, invited Rusike to participate in its newly established academy, and she planned to join a D.C.-area club as Guthrie had done.

But her friends persuaded her to try to start a team at Howard, and after generating interest through group chats and social media, she started developing a plan as a freshman last year.

By April, Guthrie’s foundation was up and running. She reached out to Tim Brown, Old Glory DC’s director of player pathway and youth development, who connected her with Rusike and Daniel Davillier, a junior at Howard who had been organizing a men’s team around the same time.

“It just kind of exploded from there,” Guthrie said.

Brown readily contributed to both efforts, having previously reached out to the school to inquire about its rugby offerings to no avail.

As part of his role with Old Glory DC, he supports the grass-roots growth and development of rugby in D.C., Maryland and Virginia, and he saw local HBCUs as important contributors to that endeavor. He helped Howard’s teams procure coaches, and he has provided jerseys and balls.

Guthrie and her group began fundraising on behalf of both teams. She serves as a de facto adviser and helps lobby Howard’s administration on their behalf, most notably supporting the effort to classify the women’s team as an officially sanctioned NCAA program.

The widespread support energized Rusike and Davillier, who said the burgeoning programs gave them renewed passion and purpose during the pandemic. It also freed them to handle other issues, such as recruiting, scheduling and securing space to play and practice.

“There’s been so much community support for the rugby team. This honestly could not have happened without so much support,” Davillier said.

The NCAA classifies women’s rugby as an “emerging sport” and sanctions teams to play across three classifications: Division I, Division II and Division III. Club teams can compete against varsity programs, but being elevated to varsity status offers benefits that include greater access to facilities and equipment.

At its highest level, the men’s game is overseen by USA Rugby, the sport’s national governing body. Men’s programs exist outside the NCAA as varsity, quasi-varsity or club teams, depending on the resources and recognition afforded by individual schools.

“The talent is there on campus. They just need to be provided with the opportunity to play,” James G. Robertson and Clive Sullivan Rugby Foundation President Carille Guthrie said.

The Howard women’s team has about 20 players, half of whom had previous rugby experience. It won its debut match Saturday in an exhibition against Johns Hopkins, and it will face Towson in another exhibition this Saturday.

Davillier expects the men’s team, which has 17 players, to compete in rugby sevens, an abridged version of the sport that requires half as many players, when it kicks off later this school year. He also hopes to compete in and eventually host the HBCU Rugby Classic, a competition in Baton Rouge that features programs from Prairie View A&M and Morehouse.

Both Howard teams will make their official debuts this spring, at which point Rusike hopes the women will compete as a varsity program and begin to establish themselves as competitive newcomers.

“I want us to be a force to be reckoned with. I want us to be a topic of conversation,” Rusike said. “In the next two to three years, when people talk about the top women’s rugby teams — when they’re talking about the Penn States, the Lindenwoods, the Life Universities — I want Howard to be in those discussions.”