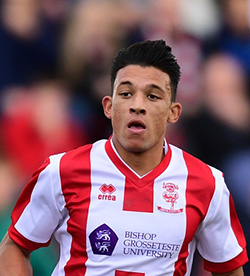 UK: Macauley Bonne could feature for Colchester United at Doncaster Rovers this weekend after being recalled from his loan spell at Lincoln City.
The Zimbabwe international, who turns 21 at the end of the month, played eight times for the Imps and scored the winner in the game at Tranmere Rovers.
Bonne could now figure for the U’s in their game at Doncaster.
Meanwhile, Colchester could hand a debut to new signing Lloyd Doyley this weekend.
The former Watford defender played 90 minutes for the U’s under-23 side against Bolton Wanderers, on Monday.
Colchester boss John McGreal said: “Lloyd is another one with a muscle injury but he got through 90 minutes on Monday.
“It was his first 90 minutes, so there are pros and cons to getting him involved.
“He’s an experienced boy and he’s come in and made a bit of a difference already in training.
“It’s great to have him on board and he’ll definitely help the club.
“He’s a perfect pro and you can hear him educating the younger boys in training and even at the under-23 game.
“He’s great to have on board and a real asset and when he gets himself into the team, he’ll want to stay in.
“He’s played in the top two divisions his whole career and he’s had a couple of promotions, so he’ll bring that mentality.”
Frankie Kent could also be named in Colchester’s squad for the Doncaster game, having continued his comeback from tendonitis in the Bolton under-23 clash.
“He is close,” said McGreal.
“It was his first 90 minutes and he’s now had a build-up of minutes over the last three games for the under-23s.
“He has been in the group for training over the last week to ten days and we now have a decision whether we get him involved with the squad or not.
“I have a lot of thinking to do with Alex (Wynter) and Lloyd (Doyley) coming into the fold as well.
“There is a lot of thinking to be done in that back line.”
Arsenal loanee Glen Kamara is available again for Colchester having returned from international duty with Finland under-21s.Advertisement