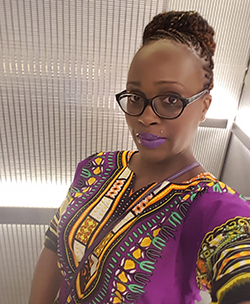 A ZIMBABWEAN woman resident in Australia, Agnes Dube, featured in a cooking show The Chefs Line that aired on SBS pitting home cooks against professional chefs.
Dube featured in the African Cuisine week where she contested with other home cooks from different cooks as well as professional chefs from Australia.
“On the 10th of April, I was in the African cuisine and I made it to the runner up position. I even won against a professional on one of the nights.
“On that night, we were to make our version of Potjie which is mainly a South African dish. I made mine as a Goat Potjie and managed to win against my fellow contestants and the professional Station chef,” Dube told New Zimbabwe.com.
She said the home cooks went up against chefs from Africola, a restaurant in Adelaide owned by South African chef, Duncan Welgemoed.
“The last home cook standing then went against the owner at the end. First night we cooked Peri peri chicken and I made mine with a twist adding peanut butter, something the judges weren’t expecting.
“I made it through to the 2nd night where we had to make our version of Potjie (a South African dish). I made a goat stew and on this night my dish was chosen to be the best against everyone including the station chef we cooked against,” she said.

Dube, a nurse by profession, made it to the third and final night, where she made Boerwos from scratch with sadza remhunga but her dish was eliminated because it did not have enough spices.
She first auditioned for Australian Master Chef and was invited to audition for the Chefs Line by the production company.
But just how did Dube get into cooking and what was her inspiration?
“As you know in Zimbabwe most people get taught how to cook at an early age. I have been cooking since I was 10. Back then growing up I hated it but then I had kids. I was home a lot with my first born who had a congenital heart defect and, to add to that, a very fussy eater.
“I started playing around with ingredients when cooking to make him enjoy the food. Funny enough, he always asks for sadza and nyama,” she said.
“I love Zimbabwean dishes because you can think outside the box. When I made chicken with peanut butter and rice with peanut butter, it was something they had never had and I love introducing such flavours to people.”Advertisement

She said because most people were not open to eating offal, she loved cooking it and to make the off-cuts stand out.
Dube, who was inspired by her grandmother, said although the competition had no prize money, she was happy that she got to show Australia that Africa, in general, and Zimbabwe in particular had cooking talent.
“I am mainly inspired by my grandmother. She is a tiny person but she always has so much strength and a big heart.  She always cooked for us whenever we visited the village.
“Even today when i go to visit her and mum i enjoy her simple meals of Nhopi and Boora; it always seems to taste better than mine,” she said.
Dube moved to Australia in 2016 and lives with her mother and brothers. Trained in Australia, she now works at one of that country’s biggest teaching hospitals.