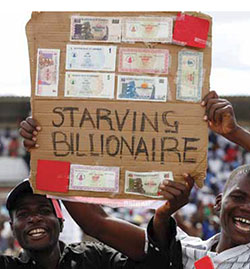 THE Zanu PF government has come up with a neweconomic blueprint known as the Zimbabwe Agenda for Sustainable Socio-Economic Transformation (Zim Asset) which will guide national developmentover its five-year term. Put together through a consultativeprocess involving  Zanu PF leadership,government, private sector and other stakeholders, the plan will focus the full exploitation of and value addition to the country’s ownabundant resources to mitigate the impact of sanctions which the party blames for the country’s economic problems.
Various financing mechanisms for the programme have been proposed, among them tax and non-tax revenue, leveraging resources, a Sovereign Wealth Fund, issuance of bonds, accelerated implementation of Public Private Partnerships, securitization of remittances, re-engagement with the international and multilateral finance institutions and other financing options, focusing on Brazil, Russia, India, China and South Africa (BRICS). NewZimbabwe.com, beginning today, and to encourage public debate serialises the plan which starts with a fairly frank analysis of the grim state of the country’s economy.
SITUATIONAL ANALYSIS
Zimbabwe is endowed with natural resources that are inabundance and these include rich mineral deposits, arabletracks of land, flora and fauna, abundant sunlight and water.
Furthermore, one of the resources that gives Zimbabwe a comparative advantage over regional and other international countries is its economic complexity that includes the strong human resource base, which is an outcome of a deliberate educational policy instituted by the ZANU PF Government at Independence in 1980.
Zimbabwe’s economic complexity as defined in the “Atlas of Economic Complexity, Mapping Paths to Prosperity”, reflects the immense social accumulation of knowledge that has been embedded in the socio-economic ecosystem and productive structures of its economy. This may explain the resilience of the economy in the face of the debilitating illegal economic sanctions. Given the knowledge base and productive resource endowment of Zimbabwe, the country is projected to be a growth leader in Sub-Saharan Africa towards 2020.
Fundamentally, the effective and efficient utilisation and exploitation of these comparative advantages places Zimbabwe on a pedestal for robust economic growth, development, and prosperity as well as social cohesion. Zimbabwe experienced a deteriorating economic and social environment since 2000 that was caused by illegal economic sanctions imposed by the Western countries. This resulted in a deep economic and social crisis characterised by a hyperinflationary environment, industrial capacity utilization of below 10% and an overall cumulative Gross Domestic Product (GDP) decline of 50% by 2008.Advertisement