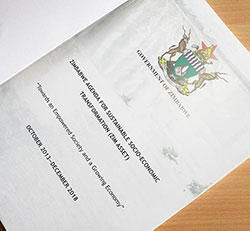 ZANU PF was handed a resounding electoral victory on the 31st of July 2013 in a harmonized election by the Zimbabwean electorate.
The victory was secured on the basis of promises the ruling party made to the electorate by way of a very positive and seemingly realistic manifesto, the Zimbabwe Agenda for Sustainable Socio-Economic Transformation (ZimAsset).
The ZimAsset document was crafted by the party with the intention of implementing it as an ambitious program of economic transformation. It was meant to achieve within the five year electoral mandate “sustainable development and social equity anchored on indigenization, empowerment and employment creation which will be largely propelled by the judicious exploitation of the country’s abundant human and natural resources”.
Despite the enticing and positive wording ranging from “result based initiatives….blitz government interventions….rapid results (quick wins)….. Cabinet monitoring and evaluation, implementation, monitoring and evaluation of the Plan,” it still seems,todate, to be just that-an ambitious document.
The document makes reference to four strategic areas of focus and action: “Food Security and Nutrition; Social Services and Poverty Eradication; Infrastructure and Utilities; and Value Addition and Beneficiation”. No doubt, the document is well written and were it to be implemented in the spirit of its wording it would transform Zimbabwe’s economy within a short period of time. It would take Zimbabwe forward in leaps and bounds to prosperity, something that all Zimbabweans have been patiently waiting for since the land revolution.
Despite efforts by numerous political stakeholders in government and in the private sector, it is sad to note that we are fast running out of the five year mandate granted to us by the Zimbabwean electorate with the ZimAsset yet to be meaningfully implemented.
As citizens and indeed as party faithful, we are now compelled to ask: what has gone wrong? What has been the problem with the implementation exercise? Could it be that the politics of the ruling party are the elephant in the room?
What do we mean by the elephant in the room? Well, the ZimAsset economic blue print can only be better implemented by technocrats. By technocrats we mean experts who approach issues and make decisions based on specialized information.Advertisement

Unlike technocrats, politicians make decisions on the basis of public opinion. It is for this reason that technocrats are usually called upon when there is no popular or easy solution to a problem.
The word technocrat is derived from the Greek “tekhne” meaningskill or craft. The ZimAsset policy document would require experts to be appointed in government positions and be tasked to breath life into the ambitious program. It is common knowledge that politicians by the nature of their position are generally pre-occupied with winning votes and remaining in office.
The concept of technocrats in government is not entirely new. The Soviet Union was the world’s first technocracy and its politburo included a high number of engineers. Hence it will not be farfetched for the Zimbabwean government to seriously consider appointing technocrats into strategic positions with the task of implementing the ZimAsset.
We have politicians who are professionals by training but have since put on political hats and operate as typical politicians. In other words they rely on the electorate to keep them in their positions. Their decisions are based on mass popular support.
Italy and Greece have undergone some short periods of technocratic governments. Economist and former Bank of Greece director Xenophon Zolotas served as Prime Minister of that country from 1989 to 1990. In America technocrats were very popular during the great depression and in the recent European debt crisis technocrats were largely responsible for rescuing Europe from the crisis which was created by politicians.
As I have said earlier, the ZimAsset economic blue print is very clear as to its purpose. It is set out to “achieve sustainable development and social equity anchored on indigenization, empowerment and employment creation which will be largely propelled by the judicious exploitation of the country’s abundant human and natural resources.”But the question we need to be asking ourselves is can we entrust our politicians with the task of making decisions that are potentially unpopular for the long term good or they will be compelled to make decisions that ensure their political survival?
Optimum outcome based on specialized information and not the opinions of voters is what we need to jump start the economy that is fast approaching comatose whilst politicians squabble for positions.