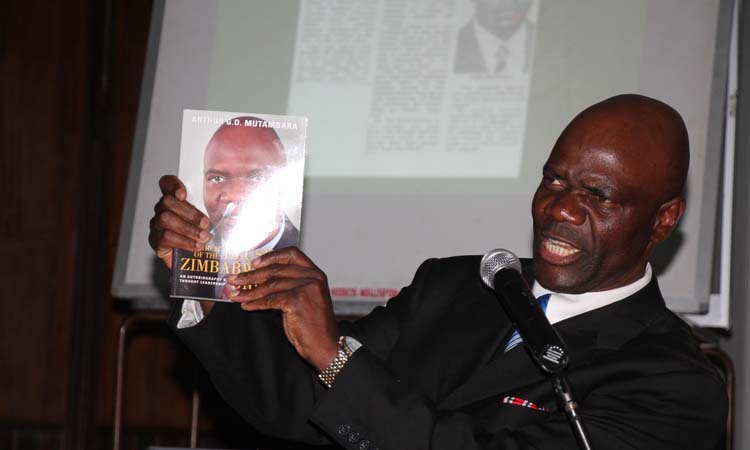 Zimbabwe’s political arena has, over the years, been host to some drama. In the 2000 parliamentary elections a fly-by-night politician railed on prime time TV about something or other and threatened that there would be pandemonium and hullabaloo if he was not elected. This was supposed to endear him to the electorate!

A concept that seems to be getting quite a bit of mention these days is something that appears to have emanated from former Deputy Prime Minister Arthur Mutambara’s repertoire of pedantic expressions. The term “generational politics” has fast acquired currency in the period preceding the 2018 elections. It is, of course, quite an appealing proposition, but one that is demeaned by rampant misrepresentation.

The creation of artificial tension pitting one generation against another is a cause for concern in a country where many people believe that misfortune is deliberately caused by malevolent others indulging in matters of the occult. Put simply, belief in miracles and witchcraft is common and rife. For this reason, it is not unusual to read in the papers about family feuds buttressed by accusations and counter-accusations. In the majority of cases, and whenever allegations are made, the culprit is almost always a senior citizen. Age and wrinkles qualify one to be an ogre to be eliminated.

There is a claim by some younger people in Zimbabwe to the effect that it is the turn of their generation to take the reins of power. This could well be the case except for the fact that business, culture and governance have always been inter-generational. A young person (as is the case with Austria’s thirty-one year old chancellor, Sebastian Kurz) can ascend to power and prominence. This is quite unlikely to be on the basis of merely his youthfulness. Conversely, Donald Trump at 70 years 220 days became president of the United States. In all cases cabinet is a mixed bag with ministers appointed either for their loyalty or for the skills they possess and consequently the value they are perceived to add to government business. Without doubt, and for the attainment of observable success, the tried and tested formula is an inter-generational one. There is therefore no need to create schisms by citing sentimental considerations that are not always practical or desirable.

As I did in last week’s installment, I again use wisdom gleaned from folktales from around the world. The folktales can be mined for culture and wisdom, and they show just how indispensable old people can be when times are hard. Folktales about the consequences when young people go all out to rid the world of old people abound. Our story for this week is called “The wise old man” and is an instructive story from Romania. Presented below is an adaptation of the story as narrated by Amy Friedman and Meredith Johnson:

Once upon a time, young people gathered together for fun. As the evening wore on, and everyone was laughing and joking and socializing, one of them suddenly said, “Why do we need old men?”

To start with, the others were shocked, but soon began talking about their fathers, who forever were giving them advice. They complained about their grandfathers’ sagas, their uncles’ tales, and their neighbours’ old-fashioned ideas. Old men had lived their lives and could be done away with. After all, who needed to hear what they had to say? Young people had better ideas and easily fitted into these modern times.

The young people went to the palace to tell the young king that it was time to get rid of all old men.

The young king agreed that getting rid of old men was a fine plan. He ordered his soldiers to gather all the old men in the whole country and lock them away. No one was to listen to any of their stories or pieces of advice anymore.

The soldiers carried out the orders.

One young man despised the new law. He loved his father and considered him the wisest man in the world. Nevertheless, he and his father were fearful of what would happen if they disobeyed. So they agreed that the old man would hide in the cellar, and they would visit each other only at night. No one would know.

That spring, the flowers bloomed, and fat, juicy grapes grew on every vine. Every tree bore fruit, and the young people celebrated their new freedom. But by summer, a drought had hit the land. The crops died. The trees withered. The animals suffered.

A severe winter followed the summer of drought. People shivered from the first to the last of the season. They had never felt such bitter cold. The fields were covered in snow and ice, and when at long last winter ended and spring came again, nothing grew.

The people were hungry and afraid. None seeds germinated because the drought and frozen weather killed them all. The people were so worried that they could not think what to do.

The young king gathered his group of young wise men, but they were too burdened by worry to be wise.

One night, the young man who had hidden his father in a cellar went to visit his father as he always did. His father looked at him and said, “I know something is wrong. I’ve never seen you looking so sad. What’s wrong? Has somebody died?”

“Oh father,” the young man said, “Our land is dying. Our seeds have all died, and there is nothing to do but wait and starve.”

The father reached out and gently touched his son’s hand. “Do not be afraid,” he said calmly. “Take our plough and go to the city. Plough up the roads that lead into the city and the roads leading out. Don’t answer anyone’s questions. Just do as I say.”

The young man trusted his father. Come morning, he harnessed his horse to the plough and set off to do as his father had told him to. As the plough turned the soil up the main roads, he saw thick, moist soil. To his astonishment, he saw the seeds of different crops beneath this soil, alive and well despite the drought and the severe cold they had been through.

In time, the weather was warm under the bright sun. Soon the seeds had begun to sprout and grow on the tilled land. The plants grew into tall, healthy corn as well as wheat and other crops.

Everybody had so many questions: “What happened? Is there some magic here?”

Remembering his father’s words, the young man smiled and said, “We are growing food.”

Reports soon reached the young king at the palace that something unusual had happened. The king sent for the young man.

“I have no doubt that your father is with you still,” the young king said. “I suspect it was he who advised you to plough up our roads. Speak the truth and I will spare your life. Lie to me, and you shall die.”

With a troubled face, the young man replied, “It’s true, your majesty,” he said. “My father lives in my cellar. I could not bear to give him up. And it was he who advised me to plough the main roads.”

“Bring your father to me,” commanded the young king.

Next day, the young man and his father went to the palace. People gasped at the sight of an old man travelling freely in a carriage. They wondered what this could mean.

At the palace, the young king looked the old man in the eye. “What is the meaning of the advice you gave your son?” he demanded. “Why have you destroyed our main roads?”

“Your majesty,” the old man said, “carts filled with seeds and corn pass through our village all year-round. Some of those seeds fall from their carriages to the ground, and the carts and ploughs and people tread over them. The seeds left behind grow if given a chance. That is why I told my son to dig up the dirt — to give them a chance.”

The young king now saw the folly of his ways and understood that just as the earth stores nourishment, old people store wisdom.

That very day, he ordered the imprisoned old men to be set free.

Before long, the people, old and young, were talking to each other, giving ready advice, sharing wisdom, meeting together and listening to each other. Life was much richer and more nourishing.

The old man became an elder and was revered throughout the kingdom. The story shows the wisdom of harnessing the knowledge and skills of different age groups. That way, a judicious and potent mix is created to carry the nation forward in unison. Everyone has a role to play and is worth something. Let us learn from the wisdom of others and not bury our heads in the sand. One hopes that at least some of our politicians read today’s story.