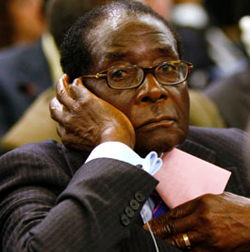 FORMAL sector unemployment is very high, companies are closing down, the economy is teetering on the brink, we don’t have a national currency and corruption is running riot in high offices. That is the state of Zimbabwe on Independence Day.
Are we independent? From what? To do what? What is there to celebrate on Independence Day? Thirty-four years on, are we in any way different from the rest of Africa or are we the worst of the lot?
In short, is there hope for ordinary Zimbabweans? What mark would those who paid the ultimate price to liberate this country give us for what we have become?
Let me state plainly that corruption and general mismanagement in Government-linked enterprises and local authorities have done a lot to discredit the image of our liberation war heroes. This is quite separate from deliberate distortions and misinformation about the motives for the land reform and economic empowerment programmes which seek to directly benefit the poor.
Beyond the short-term, I should proudly say we have tried to be different and more inclusive economically.
The general narrative about Africa is that the continent has regressed since the advent of independence. It is not unusual to hear some disillusioned Zimbabweans shouting that we were better off under Smith. GDP figures are always readily available to buttress these often misleading claims.
Sadly, a majority of those who revel in this researched nostalgia have no clue of whose welfare is covered under those glowing GDP figures. They can’t explain why it would then have been necessary for someone with a university degree to opt to go to war than simply get a job, buy a house in the suburbs, buy a car and marry.
All said, these protest messages reflect our current lived reality: the impatience to enjoy, the self-indulgence about what we don’t own or produce, the love for the transient, lack of appreciation for the spirit of sacrifice for the greater good and our search for the elusive glamour of Hollywood as gleaned through the flat screen.
It reflects the life of greedy and ostentatious opulence we see around us, much of it unaccounted for.
Yet it is arguable that as Africans we have generally been like apologetic about their independence, often treating it as if it were a gift, more an accident of history than a call of destiny. We have refused to make a clean break with colonialism, imperialism and its capitalist tentacles which make it nearly impossible for an independent African state to act as such: standards, norms and best practice are established for us, so that anything different is sinful deviance. We have to tow the line.Advertisement