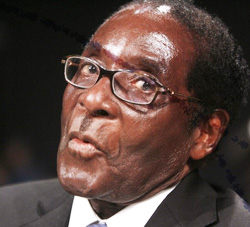 TALENTED with foresight and frankness, Mwalimu Julius Nyerere did not mince his words when he advised then Prime Minister Robert Mugabe in 1980 “You have inherited the jewel of Africa, please don’t destroy it”.
As the nation commemorates the 35th anniversary of independence, this incisive piece of advice and prophetic wisdom easily comes to mind.
Given the forlorn and deplorable state of the nation, the majority of Zimbabweans have literally stopped celebrating independence. This is not to say Zimbabweans are no longer patriotic but they are just being practical. For three and half decades, the nation was taken for a ride by the corrupt, violent and selfish “chefs” whose protruding bellies and flamboyant lifestyles are probably the only reminder that we once celebrated independence.
Those who were too young in 1980 to have fought in the war, myself included, are now old enough to be grandparents and yet we have only known one ruler since then. The obsession and euphoria of Gore remasimba evanhu (The year of people’s power), has now been replaced with despondency, doom and gloom.
When our genuine and gallant fighters returned from the “bush”, we were all very excited. Some were meeting their beloved ones for the first time in many years and yet others were just happy to see a new dispensation unfolding. We all thought the nation was, at last, moving in the right direction. For those who lost relatives and neighbours during the bitter war, this was both a relief as well as a very emotional moment.
Comrade Felix Hondo, the ever joyful and energetic youngest son of Pirikisi from Gutu, was one of the lucky ones to be reunited with family and friends. He loved singing and dancing. We connected easily. The fearless, humble but effective comrade Musa from Bikita also returned to reunite with family and so did comrade Mabhunu Muchapera whose heroics are still vivid in the minds of many villagers in and around Zaka. We proudly welcomed and sang praises for these returnees. At the national level, of course, there were Rex Nhongo, Lookout Masuku, Josiah Tungamirai and many others.
Sadly, a prominent business family at our rural township was not among those celebrating. Godfrey, their beloved, handsome, intelligent and promising son and brother was among the senior students taken away by the comrades when one of the best high schools in Manicaland was raided at the peak of the war. For years, the family was made to believe that Godfrey was among those who had been sent overseas to further their studies. He would return on completion of studies, they were told. 35 years on, Godfrey has not been seen or heard from. There can only be one reasonable conclusion, he paid the ultimate prize for our independence, with his precious and young life. Wherever your remains lie, rest in peace Godie.Advertisement

As we were celebrating the dawn of a new era, we also saw an influx of academics and professionals from all corners of the world, some transited through Mozambique, only for convenience. All the same, it was encouraging.
We went on to have arguably the most educated cabinet on the African continent which included Dr. Eddison Zvobgo, Dr. Hebert Ushewokunze, Dr. Naomi Nhiwatiwa, Dr. Simba Makoni, Dr. Simon Mazorodze, amongst others. It was like the who is who of academia! Joshua Nkomo, Vengesai Muzenda and Mugabe himself, provided the gravitus required of such an establishment. Denis Norman from the Rhodesian Front, ensured that our agriculture remained on track. Even Comrade Chinx composed a number of songs celebrating this diversity and unity which was reflected by the composition of his own band at the time. We had started on a very good note and had a lot of hope.
Rex Nhongo led the smooth merger of the armed forces when it was hard to imagine that members of the Rhodesian forces could ever co-exist with our guerrillas. The amalgamation was done professionally and with the full application of the human mind. On the political front, to keep leaders in check, the Leadership Code was crafted. Socially, education, health and road infrastructure, were at the epicentre of national development. A lot of primary schools were upgraded to secondary schools which we referred to as Upper Tops, well-equipped clinics sprouted in every village and locality, road works were evident on all major highways. Manpower development became a national mantra. In a short time, we enviously became the case study for the region. Medical and engineering students from neighbouring countries were sent to Zimbabwe to study our “model” during internship. Indeed, we seemed to be on the right track.
Little did we know that in the background, Weevils were busy stealing, looting and enriching themselves. This vice only became evident to the majority when the floor of the national granary was beginning to show. The Willowgate scandal was one of the turning points. When Eddison Zvobgo and Edgar Tekere lost their voices complaining about the blatant disregard of the Leadership Code, nobody listened. Later, in the 90s, in a very careless miscalculation, the political leadership embraced ESAP, hook line and sinker, without any empirical evidence to the effect that this economic experiment had been successful anywhere in the world.
It was during that period that we were asked to tighten our belts while the “chefs” were busy loosening theirs. When shops started getting empty and inflation going through the roof, ZANU PF “chefs” blamed this on FOREX and drought. They never saw anything wrong with their collective decisions.
Later, when some started realising that the problem was political, they chose to be parsimonious with the truth and invented a new theory “the president is a good man surrounded by some bad ministers”.  Many believed that Robert Mugabe was at the level of angel Gabriel, he could never go wrong. Progressively, a good number of the blamed ministers left centre stage either through natural attrition or systematic victimisation / elimination. This left Mugabe, Mujuru, Mnangwagwa and Sekeramayi grossly exposed. Having run out of scapegoats, the blame was shifted to sanctions. We all know how soporific this song became until recently when somebody made a new discovery, “No, it’s the Weevils”. The Weevils were quick to hit back “It’s not us, it is the Gamatoxes”. As the childish blame game continues, so does the suffering of the majority.
If Zimbabwe’s crisis can be traced from1980 to the present day, there can never be a prize for correctly guessing that four central players; Mugabe, Mnangagwa, Mujuru and Sekeramayi are the authors of our misery and failure. They got so obsessed with power that they forgot to reflect on Julius Nyerere’s wisdom. In the process, they literally ran down the jewel of Africa. On this 35th independence anniversary, Zimbabweans must do some serious introspection and start searching on the horizon for a lasting solution. We certainly can’t continue to do the same thing and yet expect different results. Nothing short of a new transformative leadership is required to extricate our potentially great nation from the self-inflicted misery and stagnation. On this 35th occasion, there is nothing to celebrate. Rather, we must introspect.
Moses Chamboko is a pro-democracy activist and interim Secretary General for Zimbabweans United for Democracy (ZUNDE). You may visit ZUNDE at www.zunde.org or email info@zunde.org