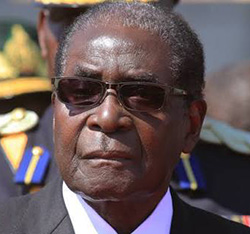 ZIMBABWE is facing an imminent crisis that will require an international humanitarian response in the near to medium-term future, with appropriate security measures for humanitarian workers.
The dire economic situation precipitated, according to economists, by disastrous indigenisation policies that have choked foreign investment, the exhaustion of Foreign Exchange reserves and a collapse in commodity prices, combined with an estimated 80% unemployment rate, the worst drought in 35 years and outbreaks of communicable diseases paint a bleak future for Zimbabweans. The International Rescue Committee (IRC) predicts that 4.4 million Zimbabweans may not have enough food to eat this year. Humanitarian assistance will be the only hope for millions but will involve considerable operational difficulties.
Security
Robert Mugabe, President since 1985, is now 93 and in failing health. With no nominated successor, political jostling and infighting have broken out in his ZANU-PF party ahead of the presidential elections planned for 2018. A familiar pattern of ZANU buying votes with gifts of land and food to the party faithful has started, with a ban on demonstrations in Harare. Of greater concern, the Zimbabwe National Army (ZNA) is divided; since independence, the ZNA has been the primary agent to maintain order and civil stability. As its grip on power splits, the prospect of escalating civil disturbances and a potential military coup become more likely.
There are signs of change: social media campaigns have highlighted Zimbabweans’ dissatisfaction with the government, while Church groups have voiced their concerns; NGO contact with such groups is likely to come under scrutiny, so discretion should be exercised. Government crackdowns are underway, and the detention and mistreatment of activists have increased 50% this year. A social media law has been passed that allows the state to seize smartphones, laptops or other devices that allow Zimbabweans to communicate.
NGOs in Zimbabwe must be aware that communications may be monitored, and IT equipment may attract attention from the authorities. Informers report any social media activity deemed anti-ZANU to the government. NGOs should make contingency plans for the detention of staff, but should also prepare for a rapid deterioration in national security. NGO workers in Zimbabwe have also reported that South African border guards will now only issue five day stays for travellers from Zimbabwe, rather than official visas, and furthermore, long delays at border crossings are the norm. This should be factored into any plans relating to evacuation by road.Advertisement

Health
The World Health Organisation (WHO) stated in 1985 that Zimbabwe’s health system was ‘amongst the best in the developing world’. 30 years later, healthcare in Zimbabwe has broken down. Healthcare facilities are running below 30% of their capability, with chronic shortages of drugs and medical staff. The prohibitive price of medicines from private suppliers means that: 64% of Zimbabweans are unable to access healthcare and curable ailments are often fatal. Accessing the cash to pay for drugs is difficult.
Running water is only available in urban areas for one or two days per week; families have taken to storing 20 and 50 litres of uncovered containers of water, increasing the risk of water- and mosquito-borne diseases in towns. Authorities have issued typhoid and cholera alerts. Experts predict that with the arrival of the rainy season this situation will worsen, as drinking water becomes contaminated. In 2008, 100,000 Zimbabweans were affected by an outbreak of cholera with 4,000 recorded deaths; if this reoccurs, the crippled healthcare system will collapse.
Organisations intending to work in Zimbabwe should ensure that they have supplies of medicines at their disposal, as these will be hard to access in-country. These should include analgesics, water purification tablets, antibiotics and rehydration kits. With an estimated 15% HIV infection rate, PEP kits should be kept for use both by international and local staff. Plans for medical evacuation to South Africa should be made for more serious illnesses.
Finance
Withdrawing money from banks involves queuing for several days (people sleep on the streets to save their places), and when banks do hold cash, withdrawals are strictly rationed to US$ 200 per day for organisations and US$ 50 per day for individuals. Informants have reported the theft of forex directly from their organisation’s accounts by the authorities. To mitigate this, exact amounts of forex to cover specific costs should be made from overseas, and the money transferred to the recipients as quickly as possible. In such economic conditions, organisations have strengthened their standard operating procedures (SOPs) for handling cash, due to the added risks of crime.
With the price of commodities falling in international markets, the government finds itself backed into a corner. ZANU abandoned the Zim$ for the US$ in 2009 to counter the effects of hyperinflation. However, Foreign Exchange reserves have been exhausted paying the salaries of civil servants and the security forces; in July the government was unable to pay employees and a general strike paralysed the country.
In November 2016, the government issued ‘Bond Notes’ to replace the foreign currency in everyday transactions. This has already sparked further demonstrations and social unrest given that the effects of hyperinflation are still fresh in the population’s memories. Journalists are already reporting a rise in extra-judicial detentions and the torture of detainees.
Police are now reduced to extorting money from drivers at roadblocks by imposing ‘fines’ to buy food or to contribute towards the payment of their colleagues’ salaries. Organisations have advised that to avoid fines being imposed at roadblocks, ensure that vehicles are fully serviced and compliant with traffic regulations (e.g. carrying required equipment). While this may work in some instances, organisations will need to discuss their policy towards corruption and put the relevant SOPs in place.
Fuel and Logistics
The situation is rapidly deteriorating and in February 2016 the government declared a national state of disaster. The cost of food is rising due to the drought while fuel supplies are dwindling and shortages of petrol make transport difficult. NGOs have found that purchasing fuel coupons that guarantee access to reserved supplies is the only way to guarantee to be able to operate. These coupons are also used as an unofficial second currency as foreign exchange bank notes become scarcer. Humanitarians operating in Zimbabwe should be aware of the logistical challenges posed by roadblocks and fuel shortages that make operating in more inaccessible areas such as Matabele Land (where much humanitarian activity is concentrated), much more difficult. Aid workers should be aware of the logistical limitations when working in remote areas and factor this into their planning.
Diaspora
Since 2008, an estimated 5,000 Zimbabweans have left the country each day. There are approximately four million Zimbabweans living abroad, most illegally in surrounding countries where their presence is creating socio-economic pressures on, and tensions with, local communities. The majority work in the informal, low-wage sector. Their financial remittances are low and have had little effect in bolstering Zimbabwe’s economy while pressuring the economies of its neighbours. Host governments have now started to expel Zimbabwean migrants.
If large numbers of migrants return to a country unable to support them, then the stage appears to be set for a humanitarian crisis with the potential to destabilise both Zimbabwe and its neighbours. At the moment, there is no incentive for Zimbabwean diaspora to return to Zimbabwe. However, if forced repatriations increase, then the potential for social instability, combined with the increased pressure on limited resources, may well lead to civil disturbance in many areas of the country. This should be factored into any evacuation or crisis response plans.
Zimbabwe’s position appears grim. Zimbabwe has become internationally isolated due to its internal and external policies and has burnt its bridges with agencies such as the International Monetary Fund, that could have offered possible lifelines. The humanitarian community should prepare to intervene and operate should Zimbabwe’s fragile systems finally collapse, in what will be a challenging and difficult environment to operate in.