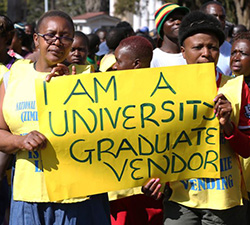 THE International Monetary Fund (IMF) has rated Zimbabwe among the world’s fragile states, saying the southern African country is struggling with severe social and political turmoil as well as deep developmental challenges.
The assessment contradicts recent claims by the country’s leader of 37 years who claimed that Zimbabwe was actually Africa’s second most developed country after South Africa.
President Robert Mugabe, who is seeking his ninth term as leader of the country, told a World Economic Forum meeting in Durban in May this year, that Zimbabwe is blessed with rich mineral resources and nowhere near fragile.
“I want to know which country has that level of development that you see in Zimbabwe. We have got universities; our literacy rate is over 90%. It’s the highest in Africa.
“Don’t talk about us as if we are a fragile state,” Mugabe said during a panel discussion on fragile states.
However, in its Regional Economic Output Report launched in Harare this week, the IMF named Zimbabwe among 20 countries that have been characterized by severe social and political turmoil, economic instability.
“Currently there are 20 such countries in Sub Saharan Africa. Since the start of this century, only a few countries for example Uganda and Rwanda, which have been able to build resilience and escape fragility which has been achieved through focused policies necessary to foster economic stability and growth,” said the multi-lateral lender.
The report noted that although many of the sub-Saharan African countries in fragile situations were negatively affected by lower commodity prices, surges in political instability and or conflict, some had managed to avoid major consequences or even fared relatively well.
“Burundi, Chad, DRC, Republic of Congo, Eritrea, The Gambia, Liberia, Sierra Leone, South Sudan and Zimbabwe experienced rather marked deterioration in their economic performance.”
Zimbabwe was also among the countries where there were risks such as low level foreign exchange reserves and unsound banking systems, being rated among the two countries with the lowest foreign exchange buffers, which remained at a low of 0.3 months of import cover, along with the DRC.
“In particular, the economic outlook for Burundi, Eritrea, Sao Tome and Principe, Togo and Zimbabwe is complicated by high levels of public debt, while climate change risks are also important for Burundi, Eritrea, Madagascar and Malawi,” the IMF noted.Advertisement