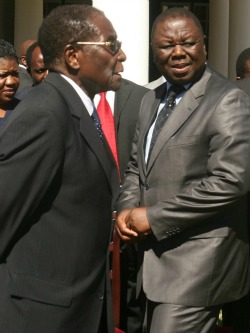 FOR the past 14 years Zimbabwe’s two main political parties have largely thrived on populist rhetoric, and one can generally identify Zanu PF with the agenda of peasant-driven populism while the MDC can be easily conjoined to proletariat populism, especially when the labour roots of the movement are taken into account.
None of the two parties has a remarkable commitment to take electoral promises beyond electioneering and acquiring the vote, and the five year governance venture between the two parties that ended last year was enough testimony to show the unanimity in deceit among Zimbabwean politicians across the divide.
In the early 1890s the United States experienced the rise of a party named the Populist Party, also known as the People’s Party. This party was a coalition of labour, farmers and the middle class. The party was a product of a broad social movement that emerged as a response to contorting challenges in the American economy and society, more or less the way economic hardships gave birth to the MMD in Zambia, and the MDC in Zimbabwe.
The Populist Party was immensely boosted by the advent of the telegraph and the telephone in the post-US Civil War era, technology that made mobilisation a lot easier than had been the case in the decades prior to the Civil War. The corporate world also expanded rapidly at this point in time, and the gap between the rich and the poor was quite obtrusive.
We have seen the link between populist politics and technology driven-globalisation in the modern day global political landscape. From the protests that toppled Hosni Mubarak in Egypt to the mobilisation of the Benghazi rebels in Libya, the effect of Internet social media could not be missed, and cannot be underestimated. It is the Internet that gave the faceless bozos going by the name Baba Jukwa the platform to carry out the breathtaking roguery that slandered hundreds of characters remorselessly towards Zimbabwe’s election 2013.
In 2000 the Movement for Democratic Change was propped up by world-wide publicity at the benevolence of powerful Western media houses whose agenda was shaped by the foreign policy of the Western Alliance in general, particularly as influenced by Britain’s bitter position over Zimbabwe’s land reform program – itself carried out in a spectacularly populist approach that was blatantly designed to counter the labour-driven populism of the rising Tsvangirai led MDC.Advertisement