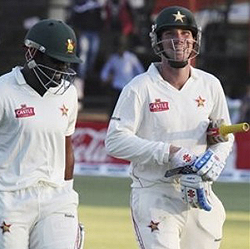 ZIMBABWE play Bangladesh on Wednesday in the third and final ODI of the series in Bulawayo.
The series is tied at one game apiece, with the tourists winning the first one before Zimbabwe came back and levelled it with a fine batting performance last time out.
With both teams looking slightly tentative in the first couple of games, the pressure of a final, which this game essentially is, could bring out contrasting emotions.
On the one hand, it could instil that sense of fear yet again, while on the other, it could allow the teams to play more freely and hence exhibit some more quality than earlier.
Zimbabwe have the momentum after winning the previous game, but we have seen on this tour that it counts for nothing – they crushed Bangladesh in their first of two Test matches but collapsed in the second as the tourists levelled the series.
What will help Zimbabwe is the fact that they will be confident they can chase big totals after they followed up a poor performance in the first ODI with a classy one in the second. Vusi Sibanda pulled them out of a potentially sticky spot last time and later Brendan Taylor, Sean Williams and Malcolm Waller did well to pick up their singles and find that boundary.
Shakib Al Hasan and Nasir Hossain continue to be Bangladesh’s go-to men in their top-order, and it will be something captain Mushfiqur Rahim will hope changes. Tamim Iqbal and Mohammad Ashraful need to convert their starts – something they have not been able to do so far.
Expect no changes to either side in this crucial third encounter.Advertisement