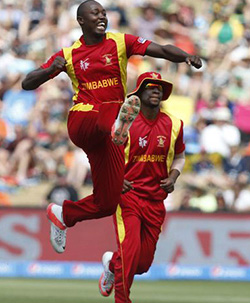 ZIMBABWE believe the guile of coach Dav Whatmore can help them spring a World Cup upset by beating the West Indies, senior batsman Hamilton Masakadza said Monday
Zimbabwe head into Tuesday’s pivotal Pool B match at Canberra’s Manuka Oval level on points with the unpredictable Caribbean cricketers and responding well to the much-travelled Whatmore’s words.
Whatmore, who guided Sri Lanka to the 1996 World Cup title and has also been in charge of Bangladesh and Pakistan, was only appointed to the Zimbabwe job six weeks before the World Cup.
However, Masakadza said he had made an immediate mark upon the team.
“The coach has had a very big impact for us. He’s changed a couple of things and he’s really got the guys going in a certain direction, and that’s been working really well for us,” Masakadza said.
“I think the atmosphere within the team has been really good now. The guys are really working hard and the guys are very focused.
“The guys are really looking forward to this World Cup, and I think even beyond this World Cup, we’re expecting a lot of good things to happen, because we’ve had a few problems in the past with administration and things like that,” he added.
“I think that’s also getting better. Guys are a little bit more focused on the actual cricket and giving the cricket side a little bit more of what they need.
“I think looking forward and going ahead, I think things are looking up.”

Masakadza, who top-scored with 80 in Zimbabwe’s creditable first-up loss to South Africa before his side defeated the United Arab Emirates, said Whatmore had complied plenty of information for the team ahead of the West Indies game.
“The coach got quite a bit of information yesterday (Sunday) when we got here, so we basically have a really good idea what it’s going to be like out there,” the batsman said.
“I think it’s going to be really important to start off well, both with our batting and our bowling, because I think their top order is very dangerous.
“We mustn’t let them get away from us too quickly, and similarly, the batting, Pakistan were four down early (against the West Indies on Saturday), and you can’t really recover from a position like that.Advertisement

“We just have to make sure that we start early, both with bat and with ball.”
Masakadka, playing at his first World Cup, said Zimbabwe would have the plans to deal with the West Indies and their potentially destructive opener Chris Gayle.
“They’ve had a bit of a mixed tournament so far, so we just come along with our plans, planning for them to be on top of their game and being able to deal with them being on top of their game,” he said.
“Chris Gayle is a good player. We all know that. He hasn’t really got runs so far.
“But we have our plans against him and have our plans against all the different batters, and hopefully we fire up front and get a few wickets early.”