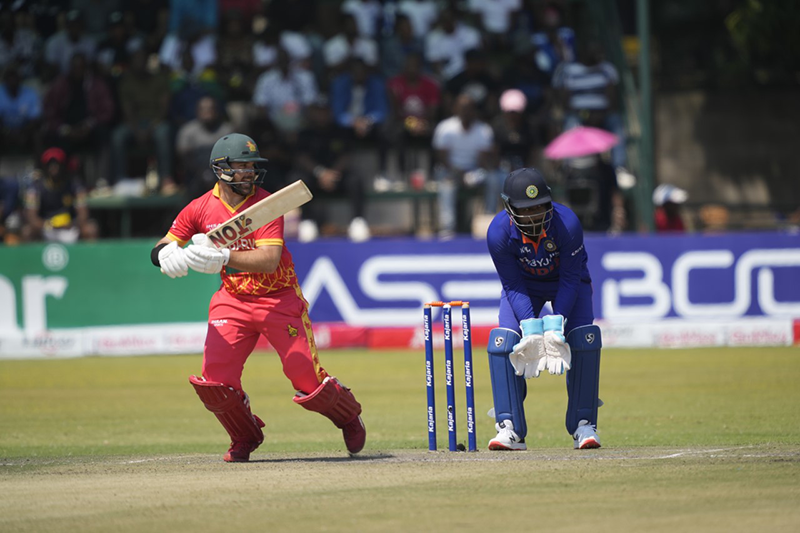 Seamer Shardul Thakur took 3-38 as India completed a five-wicket win over Zimbabwe to claim victory in their three-match One-Day International series with a game to spare at the Harare Sports Club on Saturday.

After electing to bowl, India dismissed the home side for 161 before chasing down their target with 24.2 overs remaining in another comfortable win to follow Thursday’s victory by 10 wickets at the same venue.

All six Indian bowlers took wickets, but it was Thakur who stood out as he dismissed opener Innocent Kaia (16), captain Regis Chakabva (2) and Luke Jongwe (6) with some excellent swing bowling.

Sean Williams was the top scorer for Zimbabwe with a run-a-ball 42, while Ryan Burl was left stranded not out on 39 at the end of the innings.

‘Early on it was a little on the slower side, but later we could bowl more bouncers,’ Thakur said. ‘What I can improve on is to guess where the batsman is going to attack me and bowl accordingly.

‘I think I have good skillsets, so I just need to keep polishing those in the nets. Sometimes you just need to hit the deck hard and keep it tight.’

India lost captain KL Rahul (1) early in their reply, while the heroes from the first game, Shikhar Dhawan and Shubman Gill, both scored 33 but could not repeat their unbeaten half-centuries from two days earlier.

Deepak Hooda (25) and Sanju Samson (43 not out) put on 56 for the fifth wicket to see India to within sight of their target.