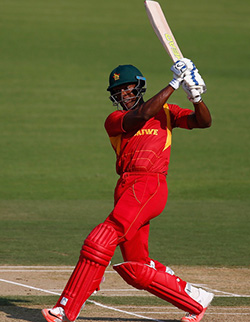 Zimbabwe – 158 for 8 in 20 overs (Vusumuzi Sibanda 59, Elton Chigumbura 30*; Tanwir Afzal 2/19, Aizaz Khan 2/33)
Hong Kong – 144 for 6 in 20 overs (Jamie Atkinson 53, Tanwir Afzal 31*; Donald Tiripano 2/27, Tendai Chatara 2/28)
Zimbabwe won by 14 runs
ZIMBABWE’S campaign for qualification into the Super 10 stage of the 2016 ICC World Twenty20 tournament in India got off on winning note Tuesday.
They beat Hong Kong by 14 runs in a first-round Group B match, at the Vidarbha Cricket Association Stadium in Jamtha, Nagpur.
A maiden half-century from opener Vusumuzi Sibanda and support from Malcolm Waller (26), captain Hamilton Masakadza (20) and then 30 not out from Elton Chigumbura saw Zimbabwe post 158 runs in their allotted 20 overs, after they had been sent in by Hong Kong captain Tanwir Afzal who had won the toss.
But Zimbabwe almost paid for their shortcomings while batting, which saw Masakadza, Sikandar Raza Butt and Wellington Masakadza run out.
Hong Kong must have fancied their chances with Zimbabwe pinned down on 62 runs for four wickets in 7.5 overs.
Out was the captain who has been in a rich vein of form since his appointment at the end of January. His was the first wicket to fall.
Then number three Richmond Mutumbami was dismissed for a three-ball duck, number four Sean Williams out for 12 and then number five Raza going for three runs from almost as many balls.
Sibanda stayed on and, with the help of Waller, stanched the Zimbabwe haemorrhage. When the latter was caught by Kinchit Shah off the bowling of Aizaz Khan in the 17th over, the partnership had moved the total to 123 for five.
But fears of a relapse were raised when Sibanda’s departure made it six wickets down for 125 runs in 16.1 overs and Donald Tiripano walked on, faced two balls and was trapped leg before wicket by Nadeem Ahmed before he could trouble the bowlers – Zimbabwe 127 for seven.
Enter Elton Chigumbura and his unbeaten 30 off 13 balls which included three sixes – a contribution which was testimony why the Quetta Gladiators signed him on for last month’s Pakistan Super League.
Afzal claimed two wickets for 19 runs in four overs for Hong Kong and Aizaz Khan two for 33 also in four overs.Advertisement

The Hong Kong chase was led by Jamie Atkinson with a 44-ball 53 runs, before he became one of the two wickets claimed by Tiripano.
Afzal featured with his unbeaten 31 off 17 balls and Mark Chapman a rapid 19 off seven balls.
Tiripano, playing in his third Twenty20 International match, picked up two wickets for 27 runs in four overs while Tendai Chatara marked his international return from a long injury with two wickets for 28 runs in four overs.
There was one wicket each for Raza and Wellington Masakadza.
Sibanda was adjudged player of the match for his Twenty20 International career-best knock of 59 runs crafted from 46 balls, which included seven boundaries, two of them sixes.
Zimbabwe will play Scotland in their second Group B match on Thursday before facing Afghanistan in their third and final qualifier on Saturday.
If they win their qualifying pool, Zimbabwe will join England, South Africa, defending champions Sri Lanka and the West Indies in the ICC World Twenty20 tournament Super 10 stage’s Group 1.
The winner of qualifying Group A, which has Bangladesh, Ireland, the Netherlands and Oman, will join Australia, India, Pakistan and New Zealand in Group 2 of the Super 10 stage.