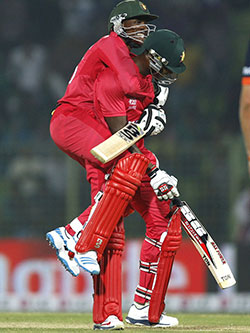 Zimbabwe 146 for 5 (Taylor 49) beat Netherlands 140 for 5 (Cooper 72*) by five wickets
ON Monday, Zimbabwe wanted to bat second in Sylhet. On Wednesday, they did.
On Monday, Zimbabwe’s captain Brendan Taylor asked his batsmen to put more value on their wickets. On Wednesday, they did.
On Monday, Zimbabwe’s match against Ireland went down to the last ball and they lost. On Wednesday, the margins were just as close but the result was different.
Zimbabwe kept themselves in contention for the main draw of the World T20, despite making hard work of chasing 141 on a surface which, on Monday, Taylor had assessed as a 180-run pitch. They needed much less and were solid at the start, but almost left themselves with too much to do at the end.
Having watched their own bowlers pluck the Netherlands top-order in the Powerplay, and concede 37 runs in the next six overs, Zimbabwe approached their chase conservatively at first. Hamilton Masakadza and Sikandar Raza left as many deliveries as they hit upfront before Raza was hurried into skying one to deep midwicket.
The early setback did not rattle Zimbabwe. At the same stage in Netherlands’ innings, after 4.3 overs, Zimbabwe had already taken four wickets. Prosper Utseya had two of those, removing Stephan Myburgh for a first-ball duck and having Peter Borren caught at mid-off.
The Cooper brothers held Netherlands’ innings together, and Zimbabwe had Masakadza and Taylor. Tom and Ben Cooper put on 52 for the fifth wicket for Netherlands, with Tom, the senior partner, adding 29 of those runs. Masakadza and Taylor put on 62 and took Zimbabwe closer to the target.

Delighted … Propser Utseya celebrates one of his two wickets