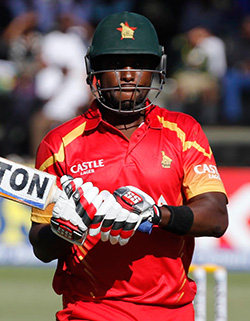 Zimbabwe 276 for 6 (Chibhabha 90, Chigumbura 67, Wahab 4-63) beat Pakistan 256 for 8 (Malik 96*, Yamin 62) by five runs (D/L method)
ZIMBABWEweathered a spirited fightback from Pakistan’s lower middle order to secure a tight five-run Duckworth-Lewis win in controversial circumstances in the second ODI at Harare Sports Club.
Chasing Zimbabwe’s 276 for 6, Pakistan sank to 76 for 6 before Shoaib Malik and Aamer Yamin resurrected the chase with a 111-run stand for the seventh wicket.
After a rain delay Malik was on 96, with 21 needed from 12 deliveries, when the heavy clouds prompted umpires Ruchira Palliyaguruge and Jeremiah Matibiri to take the players off.
With the sun setting, the light only got worse, allowing a rare Zimbabwe win – much to Malik, and Pakistan’s chagrin.
That they got so close at all was due mainly to Malik’s brilliance and it was once again left to Pakistan’s lower order to try to lift the team out of the mire when they slipped to 17 for 3 – their worst start of the tour.
Malik responded with one of his finest limited-overs innings, and came within one shot of what would have been his ninth ODI hundred – and the first by a Pakistan No. 5 batsman in a run chase.
He was also helped by Zimbabwe’s errors in the field, having been dropped by substitute fielder Tino Mutombodzi at backward point when he was on 37. That was just one of a number of errors from the hosts in the latter half of the chase.
In the course of their own innings this morning, Zimbabwe had looked a completely different batting unit to the one that was bowled out for 128 in the first ODI. But this time it was in the field that the wheels had threatened to come off.
The required run-rate was already above seven an over when Yamin joined Malik at the wicket, but the direction of the match changed completely with Yamin’s first boundary.
He stepped down the wicket to hit legspinner Graeme Cremer back over his head, who leapt up at the ball and landed awkwardly to suffer a painful ankle sprain.
Zimbabwe lost a bowler, but they also very nearly lost the plot as they dropped three catches, missed a stumping and let the game drift completely away from them in the following 16 overs.Advertisement

Malik and Yamin collected five sixes and nine fours during that period, Yamin celebrating a 54-ball fifty with a mid-pitch sajda. His fearlessly attacking innings eventually came to an end when Elton Chigumbura was fortunate to have him caught down the leg side but, with rain falling intermittently, Malik continued undeterred.
He found an able partner in Yasir Shah and, on either side of a dramatic rain break, took the equation down to 21 from the last two overs. But then the umpires called the players together and told them they could no longer see the ball.
Chigumbura led his players off, and just over ten minutes later the match was called off, the result going in Zimbabwe’s favour.
Chigumbura had played a strong hand with the bat for Zimbabwe earlier in the day, his 55-ball 67 building upon Chamu Chibhabha’s patient 90 to lift the hosts to a competitive 276 for 6. That was more than had been expected when Azhar Ali called correctly at the toss and sent the hosts in this morning.
Harare Sports Club head groundsman Fungai Shanganya left plenty of grass on the track for this game and there was a noticeable twinge of green to it, suggesting swing, seam and bounce first up.
The pitch was definitely firmer, but the movement on offer was not extravagant. For their part, the hosts promoted senior batsman Hamilton Masakadza to open the innings with Chibhabha, but his scratchy knock came to an end when he skied a pull off a Wahab Riaz bouncer.
At the other end, Chibhabha displayed a sure-footed drive and favoured the off side to collect his first four boundaries on that side of the wicket. He took a particular liking to Yamin’s medium pace and played the spinners with measured assurance with Chari playing a perfect foil to the more attacking Chibhabha.
When Chari edged Mohammad Irfan to Mohammad Hafeez at first slip against the run of play Pakistan had an opening, and enlarged it with the wicket of Sean Williams soon afterwards to reduce Zimbabwe to 132 for 3.
A tiring Chibhabha needed treatment for cramp on a sweltering day – this being his longest international innings in terms of balls faced by quite a distance – but even as he struggled, Chigumbura asserted himself.
Chigumbura had taken a little time to play himself in and was struck a fierce blow to the helmet by Riaz, but his riposte was emphatic.
A muscular pull off the same bowler sent the ball onto the roof of the Tobacco Stand on the Western side of the ground, and he celebrated a 46-ball half-century by lifting a full toss from the same bowler almost as far.
With Sikandar Raza also playing a busy hand, and Richmond Mutumbami and Luke Jongwe’s cameos ensuring an energetic finish, Zimbabwe took 96 off the last ten overs. It proved just enough.