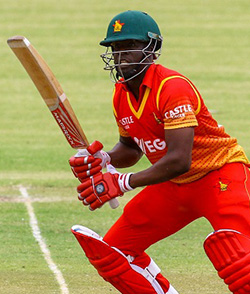 ZIMBABWE beat West Indies by five runs under the Duckworth-Lewis method in Friday’s rain-affected one-day international to qualify for the triangular series final against Sri Lanka.
Tendai Chisoro played a crucial role with bat and ball as Zimbabwe staged a remarkable comeback.
Chisoro scored an unbeaten 42 and then claimed figures of 2 for 23 in six overs to help Zimbabwe recover from a disastrous position and go through to Sunday’s final.
With West Indian spin duo Devendra Bishoo and Ashley Nurse picking up three wickets apiece, Zimbabwe were reduced to 89 for seven in their innings but recovered to post 218 for eight in 49 overs on the back of Sikandar Raza Butt’s unbeaten 76.
Crucially, Sikandar Raza and Chisoro added 50 runs from the final five overs of the innings, putting on an unbroken 91 to set a new record for ninth-wicket stands by Zimbabwe in ODIs.
In reply, the West Indies were 124 for five in the 29th over when rain returned to bring the match to a premature end, leaving them short of the Duckworth-Lewis equivalent.
Hosts Zimbabwe will now face Sri Lanka in Sunday’s final at the same venue.