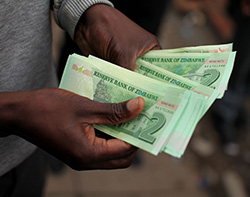 Zimbabwe faces a financial Armageddon that could turn it into another Somalia.

AT THE 2009 International Monetary Fund meeting in Istanbul, Zimbabwe’s Tendai Biti accepted an award as Africa’s finance minister of the year.
He was lauded by Euromoney magazine at the time for having accomplished great things in just seven months on the job.
A rare moment of hope in Zimbabwe, for a while
The then-43-year-old lawyer turned economist had turned off the printing press, ending one of the world’s worst hyperinflations.
Biti also abolished the Zimbabwe dollar, a currency so discredited that billion dollar notes were needed to buy basic goods. Biti said the U.S. dollar should be Zimbabwe’s money. It remains so today.
In accepting the award, Biti said it was a miracle that a national unity government had come to power. Rule of law, he promised, would return to in a land devastated by mismanagement and corruption.
Biti blamed Robert Mugabe, Zimbabwe’s president since 1980, for the economic collapse. Then he added an ominous footnote. Mugabe, he said, was holding on to the central bank in violation of the power sharing agreement.
Biti lasted four years in his post as finance minister, until a disputed election led to Mugabe’s Zanu PF party regaining full control of the government in 2013. Biti’s accomplishments of recovery and fiscal discipline were undone.
The downspin, yet again
Zimbabwe today confronts economic calamity brought on by corruption, the worst drought in 30 years, political infighting, weak commodity prices, and a 50% appreciation of the dollar against the currency of South Africa, Zimbabwe’s major trading partner.
Gradually, Zimbabwe’s formal economy ground to a halt as businesses closed and unemployment climbed to 90%. A fifth of the once 14 million strong population has emigrated.
Without a national currency and unable to borrow abroad because creditors hadn’t been paid, Zimbabwe ran out of money. Civil servants, police and the army are seldom paid on time.
From hyperinflation to deflation
In just four years since Tendai Biti left his post, Zimbabwe lurched from debilitating hyperinflation to the exact opposite: deflation.
As an emergency fix, Mugabe’s central bank chief on November 30th began circulating a parallel currency euphemistically called “bond notes” because citizens adamantly oppose reintroduction of the Zimbabwe dollar.Advertisement

Gresham’s Law — bad money driving out good — will likely take effect as people spend the bond notes while hoarding dollars. A depreciating value of bond notes could cause havoc as they are fixed one to one with the dollar.
Currently heading an opposition party, Biti warned on December 9th that Zimbabwe faces financial Armageddon that could lead to civil war or a military coup.
He said only a unity government and a switch from the U.S. dollar to the South African rand can avert disaster.
Looming above the economic malaise is political paralysis. Mugabe has not revealed a plan of succession. Former top deputies in the ruling party are feuding and one has established her own political party in advance of elections scheduled for 2018.
The president’s wife is in the mix, presenting herself as her husband’s logical successor.
Is China really Zimbabwe’s “all weather friend”?
A Chinese expert on Zimbabwe, Wang Xinsong of Beijing’s Normal University, says [EVEN] China worries about the “complicated and uncertain” political situation in Zimbabwe.
China is a big aid donor and major investor in Zimbabwean agriculture and mining. President Xi Jinping visited Harare in December 2015 assuring Mugabe that China is Zimbabwe’s “all weather friend.”
But that may be changing. Wang says China—like western nations– is unsettled by Zimbabwe’s indigenization law that says enterprises must be locally owned.
Wang says Beijing is dismayed with political turmoil and is “walking a fine line, not taking sides with political factions and worried about keeping China-sponsored assets safe.”
The West’s role in the drama
The succession drama is also a challenge for the West. European powers have taken the lead promoting a plan to clear Zimbabwe’s huge arrears to international lenders so that fresh credits can be available for implementing reforms.
Critics oppose the European plan as a lifeline for Mugabe and his cronies, assuring a continuation of brutal dictatorship.
In the meantime, what’s left of the economy steadily deteriorates. One specialist just returned from Zimbabwe is deeply pessimistic.
He agrees with Biti that the situation is dire and fears a collapse of government authority.
Events could soon degenerate to the point of turning Zimbabwe into a Somalia-style failed state of roving bands and lawlessness.
Barry D. Wood is an analyst and commentator, mainly on economic issues.