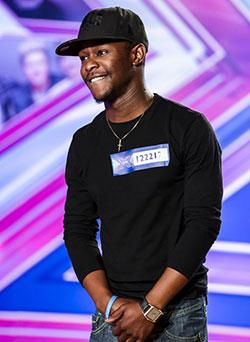 A TALENTED  Nando’s cashier has said he is having ‘the time of his life’ on British TV talent show The X Factor.
Bre Musiq, 24, impressed the judges with his rendition of Blackstreet’s No Diggity, prompting all four judges to say ‘yes’ in the ITV show which aired on Saturday night.
He will now go through to the next stage of the competition to sing in front of the judges at Wembley Arena.
The former Ormesby Comprehensive student said: “I am having the best time of my life.
“Everyone is great.
“Everyone is ‘for themselves’, obviously, but it’s nice to be part of the same thing as other people.
“I don’t know which judge I like best as they are all different – I just make sure that I take on board what they have said.
“I have enjoyed all of the stages so far if I’m honest.”
Bre Musiq X Factor Audition