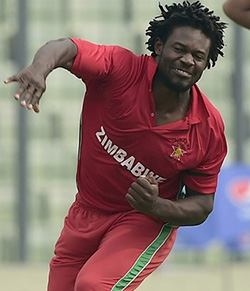 Big Picture
ZIMBABWE’S packed schedule has already moved swiftly through two limited-overs series since the end of September, and now the national side heads down to Bulawayo for their third series in as many weeks, this time against Afghanistan.
The hosts will have to hit the ground running, as Afghanistan have already been in the country for over a week preparing for these games, and have enlisted former Pakistan batsman Inzamam-ul-Haq as their head coach.
Last time these teams met, the one-day series was shared 2-2, and the upcoming games are also likely to be closely fought.
That series, in 2014, is also surprisingly the only time that Afghanistan and Zimbabwe have played each other in international cricket.
Zimbabwe’s batsmen scored heavily in the opening two games of that tour, but tailender Dawlat Zadran inspired victory in the third, hitting four sixes in a seven-ball innings to win the match in the final over, and Zimbabwe crumbled in the fourth.
The contrasting approaches and styles of play apparent in that series, and generally in the two sides, will make for interesting watching over the next two weeks. Afghanistan have a quicker, if more erratic, bowling attack than the hosts, and they will certainly try to hit more sixes.
Zimbabwe’s style is more conservative, and with home advantage and greater experience they should be able to dominate a lengthy five-match series, and will arrive in Bulawayo buoyed by their success against Ireland.
Afghanistan’s warm-up games were played at the Bulawayo Athletic Club, rather than Queens Sports Club, where the internationals will be held.
Nevertheless, conditions there will be similar to those at Queens, and Afghanistan laid down a marker by winning their first two matches against a Chairman’s XI of reasonable strength before Regis Chakabva’s 92 in the third match set up a 34-run win for the Zimbabweans.
Afghanistan will be pleased by their progress, as well as by the chance for a significant amount of top-level competition: they’ve not played an ODI since the World Cup in March.
In the spot-light
Craig Ervine’s languid batting style suggests a batsman who has always got time to move fluently through his strokes. He never seems to be in a rush, nor over-hit the ball, even when he is hitting sixes.Advertisement

That style will be in total contrast to many of the opposition’s top order, and this year it has brought Ervine 494 runs at 54.88, including two hundreds.
He played a leading role in both of Zimbabwe’s wins over Ireland, and if his gammy hamstring holds together he will be the anchor around which Zimbabwe can build match-winning totals.
Team news
Zimbabwe will have a good idea what their best combination looks like, having played so much cricket recently, but these games will be their first in Bulawayo this year and the change in conditions may mean a little tinkering with the bowling combinations.
Zimbabwe: 1 Chamu Chibhabha, 2 Richmond Mutumbami (wk), 3 Craig Ervine, 4 Sean Williams, 5 Elton Chigumbura (capt), 6 Sikandar Raza, 7 Tino Mutombodzi, 8 Wellington Masakadza, 9 Luke Jongwe, 10 Tinashe Panyangara, 11 Taurai Muzarabani.
Quotes
“I’m extremely hopeful that the lads will continue with the great form and desire that they’ve shown in the last few games.
“The chances of doing well become better if everyone is on the same page,” Zimbabwe coach Dav Whatmore.