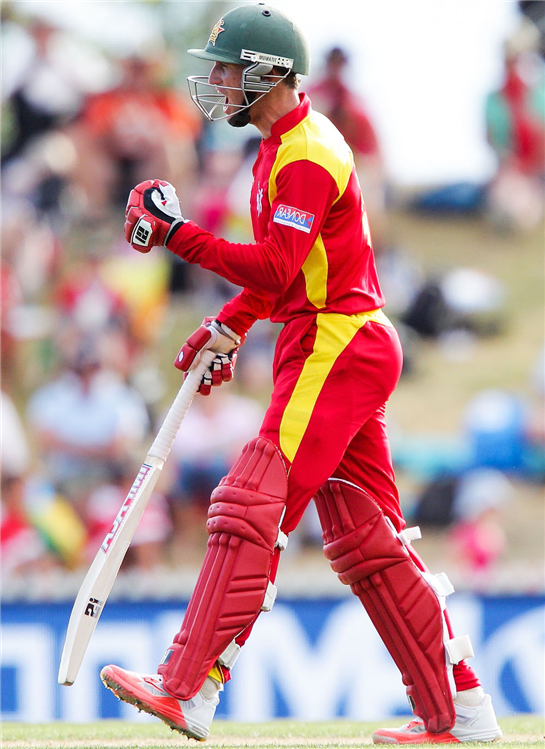 ZIMBABWE all-rounder Sean Williams believes they can beat any of the top teams at the World Cup. He was speaking to the media after their win against UAE. Below is the full transcript of the interview.
Q. Sean, just a quick question. Your thoughts on the game today?
SEAN WILLIAMS: Well, obviously, Zimbabwe versus UAE, a lot of people thought Zimbabwe should have walked over UAE. That clearly wasn’t the case, and that clearly wasn’t the case in the changeup this morning when we arrived. We didn’t know what to expect from them. They put up a really, really good performance with the bat. Our fielding wasn’t that great today. It let us down in a lot of ways. But all in all I thought it was a really good game to watch, and a really good game to play.
Q. Sean, what was your plan when you sort of were there in those middle overs knowing that a few wickets had fallen to a reasonably big total. Just sort of knock it around and get to a point where you can go harder?
SEAN WILLIAMS: Yeah, obviously from the previous game versus South Africa, I came in and I felt very flustered at the wicket. It was coming that I was going to get out against him, and I learned my lesson very quickly there to come in, get in, and hit the ball down on the ground. Build on innings and go from there. Wickets in hand in the end is always going to be the goal.
Q. Were there a few nerves there amongst the boys at 4 or 5 down and that sort of change?
SEAN WILLIAMS: I wasn’t actually in the change room at the time, but I could feel it out there. I tried not to show it. Just tried to breathe, relax and hit the ball on the ground and stick to what we’ve been training, and we ended up playing well.
Q. As a gap between the associate nations and the other nations mattered a little bit, or are these one-off games?
SEAN WILLIAMS: No, the gap has closed in a very, very long way. I believe that every single team at this World Cup deserved to be at this World Cup. For example, any one of the top teams could be beaten by us, could be beaten by Scotland. Anyone, any cricket team on that day if they get all three departments right they’ll take the top team right to the end.
Advertisement

Q. Given this was such a big match for the UAE coming back into the World Cup after 18 years, what did you think they did right and where do you think they went wrong in the match?
SEAN WILLIAMS: Well, that’s quite a tough one because they’re obviously still learning, so they batted really well. They took the power play. They hit the ball really well down on the ground, straight down on the ground. When we were watching highlights of them before the game in our team meetings and that preparing for them, a lot of their wickets we actually did expect them to play across the line a lot of strong sweeps and a lot of sweeps. Things just we basically would wait for them to get themselves out, and that wasn’t the case. They actually hit the ball really well down on the ground and hit the ball long. In the bowling department they were very well-disciplined up front. I thought while (Indiscernible) was under a lot of pressure. He faced a lot of balls, and it was just a matter of time before a wicket was going to fall in and he got out. So I guess they just need to learn when the key moments actually are in the game. Same with Zimbabwe. We’re still learning and trying to understand when the key moments are and when to put the foot on the gas.
Q. You went into your first game against Africa as massive underdogs. Then between this game and that game there’s been a so-called upset of this ground. How does your approach change you going into this game as favourites? How does that change your approach between the two games massive underdogs versus massive favourites? How does that change?
SEAN WILLIAMS: It doesn’t change any approach to be honest. At the beginning of the day if you look at the scoreboard, both of us are for not. So we have to respect that and respect the opposition. Ireland on the good side, West Indies on the day, Chris Gayle comes at you and he’ll beat people single-handedly. So you know, it’s just a matter of doing things the right way. Going back to the drawing board, hitting the ball down on the ground, and carrying on doing what we practiced every single day.
Q. I know you’re not selective, but Chibhabha made good runs against South Africa. Was he injured?
SEAN WILLIAMS: Yeah, he’s hurt his knee at the moment. He was playing with an injured knee against South Africa. Australia could run a little bit. He failed his fitness test yesterday, so he couldn’t play which was a big loss for us. But he’s currently under physio, and I’m sure he’ll be ready for the next game.
http://www.firstpost.com/sports/zimbabwe-can-beat-top-team-world-cup-says-allrounder-sean-williams-2109027.html