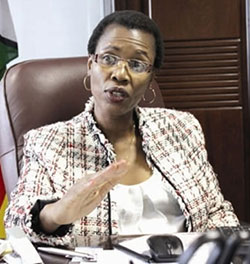 ELECTRICITY–STARVED Zimbabwe can save up to 300MW of power per day through embracing energy efficiency measures a recently completed national energy audit has revealed.
The country currently generates about 1,500 megawatts (MW) of electricity against national demand of 2,000 MW, forcing power utility ZESA to ration supplies in a development that has adversely impacted the productive sectors of the economy.
However, a National Energy audit conducted by the African Sustainable Energy Consortium (SAEC) in partnership with the Scientific and Industrial Research and Development Centre (SIRDC) shows that a huge part of the gap between generation and demand can be reduced through efficiency savings.
Presenting the findings of the audit in Harare this week, principal investigator Professor Edward Chikuni said the results showed that there was no energy saving culture in the country with most sectors affected by the problem, including mining, manufacturing, agriculture and domestic use.
“Of all the farms that were investigated, it proved that excessive water leakages in irrigation piping system, oversized and under sized water pumps, air leakages in compressed rooms and inefficient lighting system e.g incandescent light bulbs and lights on during the day contribute to the loss of energy,” he said.
In addition, an “I don’t care” attitude in residential areas has increased the loss of energy by 35%.
“And one has to remember that the informal sector and small to medium business are now doing their businesses in residential areas and no one cares about the saving of the energy,” said Prof Chikuni.
“The same problem is also prevalent in the mining and manufacturing sector where the use of old machines, non-holistic approach to energy efficiency due to limited knowledge, reduced in capacity utilisation and staff are not motivated to save energy.”
ZERA Chief Executive Officer Engineer Gloria Magombo said the findings of the energy audit report would help quantify the potential savings per sector as they are then able to prop up initiatives for saving energy to be put in place through the Zim-Asset agenda.
“The issue of attitude, data collection and that of industry being unable to understand the need to consume energy for productive purposes is what needs to be addressed,” she said.Advertisement

“There are a lot of machines just running in the industry but not producing. We need to have trained energy managers who can understand why energy saving is important as this will also reduce the cost of production in the country.”
A senior government official recently revealed that the country was on course to bridging the gap between electricity generation and demand as well as become the chief power supplier in the region.
Patson Mbiriri, the energy ministry’s permanent secretary, told a recent SADC energy meeting in Victoria Falls that Zimbabwe has embarked on several new projects which would add 7,000MW to the national grid by 2022.