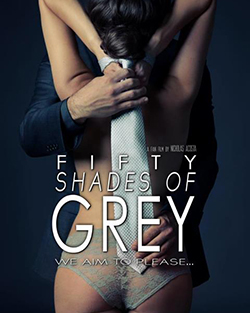 ZIMBABWE’S censors have demanded heavy editing of the film Fifty Shades of Grey, leading to some movie theatres not screening it, it emerged on Wednesday.
“The Zimbabwe Censorship Board has denied certification to screen the film in its original form, based on the explicit nature of intimate scenes contained within the movie,” Ster-Kinekor Sam Levy’s Village, a movie theatre in Borrowdale, Harare, said in a statement on Facebook.
Two cinema houses in the capital Harare are screening an edited version of the movie.
Sam Levy’s Village was not screening it.
“It was felt that heavy censorship would compromise the integrity of the film and thus, a decision has been made by Ster-Kinekor Sam Levy’s Village not to screen the film within its complex.”
“So since it will be edited, will it be like 46.3 shades of Grey?” asked Harare’s popular blog www.3-mob.com on Wednesday.
The country’s board of censors pre-screens all movies before they are released in the country. It checks on public performances by performing artists, who must be registered with the board.
Two other Ster-Kinekor cinemas in Harare — in the shopping malls of Eastgate and Westgate — plan to show the film once they have fulfilled “security requirements” demanded by the board, the cinemas said in a separate statement.
“The movie was never banned” in Zimbabwe, they added.
Fifty Shades of Grey, which depicts the relationship between gauche student Anastasia Steele and wealthy businessman Christian Grey, was released worldwide on February 13.
Some critics have objected to the sex scenes and unequal power play in the film and the original book by EL James.Advertisement