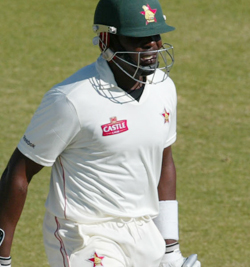 Bangladesh 391 & 291/9d
Zimbabwe 282 & 138/4 (43.4 ov)
Zimbabwe require another 263 runs with 6 wickets remaining
ZIMBABWE were set a 401-run chase to win by Bangladesh on the fourth day of their second and final test at the Harare Sports Club on Sunday.
Bangladesh declared after reaching 291/9 in their second innings with a 400-run lead.
Zimbabwe were 138/4 in reply at the close of play due to poor lighting after losing the wickets of Regis Chakabva (22), Vusi Sibanda (32) and skipper Brendan Taylor (10) for an underwhelming 96/3.
Waller then fell to Ziaur Rahman to leave Zimbabwe wobbling at 123/4.

Hamilton Masakadza (46 not out) and Shingi Masakadza (7 not out) will lead the Zimbabwe chase when play resumes for the final day on Monday.

Zimbabwe won the first Test by 335 runs but have struggled with ball and bat in the second.
More likely at the close of Monday’s play is a series-levelling Bangladesh win and the first time the country has avoided defeat in a series in four years, ending a run of nine straight series defeats. Bangladesh would deserve its victory having rebounded strongly from a heavy loss in the first test to dominate the second from the start.
On Sunday, wicketkeeper-batsman Rahim led from the front to build the significant lead lead, hitting nine fours and only missing out on a third test century by seven runs when part-time seamer Hamilton Masakadza forced him to flash a catch to Vusi Sibanda at backward point.
Rahim shared partnerships of 84 with Shakib (59) and 84 again with Hossain, who was 67 not out when Bangladesh declared.
Shingirai Masakadza was Zimbabwe’s best bowler with 4-58 and his brother Hamilton picked up 3-24, but the home team’s attack was badly hampered by the loss to injury of Keegan Meth, who was unable to bowl at all in Bangladesh’s second innings.
Facing the huge target, Zimbabwe openers Vusi Sibanda and Regis Chakabva both got starts but were dismissed and crucially for Zimbabwe’s hopes, captain and lead batsman Brendan Taylor was out for just 10 and Malcolm Waller for 15.
That left the Masakadza brothers to take Zimbabwe to stumps, with Hamilton unbeaten on 46 with 36 of his runs coming from boundaries in a temporary counter that needs to last most of Monday if the Zimbabweans are to have any chance at saving the test.Advertisement