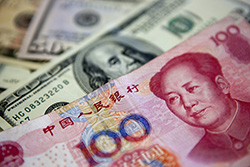 THE Reserve Bank of Zimbabwe is still negotiating with its Chinese counterpart for a deal for the southern African country without its own currency to settle payments using the Chinese yuan as an alternative to the American greenback.
Central Bank Governor John Mangudya said at his annual monetary policy statement that Harare sought to use the yuan to settle bilateral trade and repay loans from China.
China has become Zimbabwe’s major trading partner but still trails far behind the continent’s economic powerhouse South Africa.
Zimbabwe is currently using multiple currencies since 2009 after it abandoned its hyperinflation ravaged currency. The nine trading currencies are the British pound, euro, U.S. dollar, Australian dollar, Chinese yuan, Japanese yen, Indian rupee, South African rand and the Botswana pula.
The U.S. dollar is dominating in the multiple currency system where it is acting as the settlement currency.
“We are not putting a yuan clearance system. What we are trying to do is to ensure that we promote all the currencies within the multi-currency basket,” Mangudya said.
“I have given examples that when you are importing from the UK you pay in pounds, when you are paying in Europe you use euros and rands when paying in South Africa. So we are still negotiating with China so that when we are buying from them we also want to pay them in their currency.”
If Zimbabwe strikes the yuan agreement with China, it will be the first such arrangement for currencies in the multiple currency basket.
Mangudya said payment in Chinese currency would help minimize exchange losses and the difficulties that the country faces in remitting money abroad due to Western sanctions.
The International Monetary Fund has adopted the yuan as one of the global reserve currencies, boosting its chance to become a viable alternative to the U.S. dollar in global trade.
Moody’s, a credit rating agency which performs international financial research and analysis on commercial and government entities, said last week that Harare’s plan to increase the circulation of the yuan could lift investment from China.
“The renminbi’s use will likely facilitate greater levels of foreign direct investment from and bilateral trade with China by reducing transaction costs and exchange rate risk,” Moody’s said.Advertisement

However, it noted that this may not be enough to strengthen investor confidence and improve competitiveness and that widespread use could be limited due to Zimbabweans’ faith in the U.S. dollar and suspicion of other currencies.