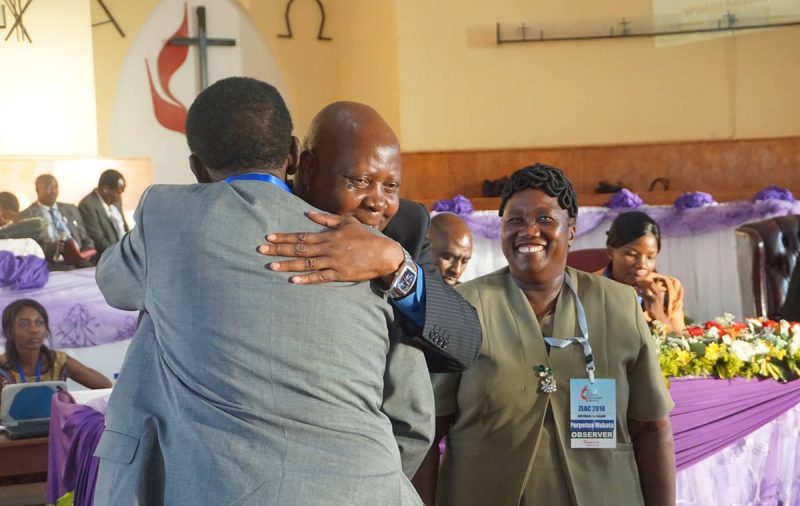 The Rev. Josephat Banda congratulates his new district superintendent of diaspora, The Rev. Stephen Mukata (center), as Mukata’s wife, Perpetua Mukata, looks on at Old Mutare Mission in Mutare, Zimbabwe, during his appointment in 2018. Mukata oversees diaspora in the United Kingdom, Australia, New Zealand and Canada
Spread This News

THE Zimbabwean United Methodist Church is flourishing in countries far from home.

The Zimbabwe Episcopal Area has planted churches in Australia, Scotland, Canada, New Zealand, United Kingdom, the Republic of Ireland and the United Arab Emirates in support of church members displaced over the past two decades by political instability and economic turmoil.

“For me, all this concern with diaspora was to follow our people who themselves wanted to keep a spiritual connection with (The United Methodist Church of Zimbabwe and their) home country’s style of worship,” Nhiwatiwa said.

“I am happy to say that the future will pass on, reside in their children and more for generations,” he said.

The idea started in Hackney near central London in August of 2000. United Methodist Daniel Mapfeka, the Rev. John Sakutombo and their families — all from Zimbabwe and now living in London — decided to pray for a church to flourish. There were six people at the first gathering.

“No sooner, the number increased … to 18, and on the third Sunday, we were 25. I became the first lay leader for six months,” Mapfeka said. “Indeed, time flies. We are now celebrating 20 years of God’s ministry” in the United Kingdom.

“Now, there are thousands of members. The church is growing. We are witnessing the glory of the Lord,” he said.

Tapiwa Muchenje, 53, former lay leader for the United Kingdom Mission Area, said United Methodists who left Zimbabwe “had to be innovative to get the spiritual satisfaction” they needed. The U.K. Mission Area includes the United Kingdom (Midlands, South, North and Central), Scotland and the Republic of Ireland.

“At the same time,” Muchenje said, “we had to harmonize The United Methodist Church system with the laws of the land, which was not easy. We registered as a charities commission in November 2002 and our first conference was in July 2003.”

As the number of congregants increased, the Zimbabwe Episcopal Area started to appoint pastors to provide guidance and help in addressing administrative issues, especially those dealing with law.

Since the first pastor was appointed in 2019, the church in the United Kingdom and Republic of Ireland has grown to 2,000 members, said the Rev. Stephen Mukata, district superintendent of diaspora and pastor in charge for Australia and New Zealand.

While the United Kingdom church was the first congregation of Zimbabwean United Methodists in diaspora, elsewhere there were other members seeking to plant their own United Methodist churches in different regions.

Mukata said in 2006, his wife, Perpetua Mukata — now the district worker for the Zimbabwe church’s women’s organization — was settled in Auckland, New Zealand. She organized worship services in Auckland and Christchurch.

“The few members in New Zealand wrote to the bishop’s office in Zimbabwe, requesting for a pastor from Zimbabwe in 2007. I was then appointed to lead this congregation in January 2008.”

He said some members from the United Kingdom who were stationed in Australia helped start the church there in 2009.

“Our first congregation gathering was in Adelaide, where Mbuya Chioniso Sanganza organized a mini-revival in May 2009,” Mukata said.

The first gathering had no more than 30 members, but the church has grown. And the wave to plant churches has cut across all ages, Mukata said.

Privilege Paganga, a young adult from Zimbabwe who lived in Adelaide, led the launch of a United Methodist church in Perth, Australia, in 2010. She became the new church’s first United Methodist Youth Fellowship president.

“The courage to start the church was irresistible,” Paganga said. “The church is still vibrant. I thank God for that.”

Mukata said that today there are United Methodist churches spread across Australia, in Adelaide, Melbourne (two congregations), Sydney, Perth, Canberra, Darwin and Brisbane, with membership at more than 600.

“This was a humble beginning of great things on this continent,” Mukata said.

He said many members from Christchurch and Auckland have migrated to Australia, but one congregation remains in Auckland.

“The distances are so vast that much of the traveling is by airplane,” Manyange said. “I am happy to say the church is vibrant.”

In Canada, United Methodists have planted churches in Toronto, Ontario, Edmonton, Hamilton and Calgary, said the Rev. Tazvionepi Nyarota, the pastor in charge for Canada.

“At its inception, worship services were held in people’s homes and then we moved to rental places as numbers increased. I was appointed as pastor in charge in 2014. As of the end of 2019, the total membership for the Canada Mission Area had increased to 314,” Nyarota said.

The first service was held in 2009 in a home in Niagara Falls with seven families in attendance, including Wilson Muzorewa and Martin Chawanda, Zimbabwean United Methodists. The pair said the church was registered as a legal entity in 2010 and they began working to attain charity status as defined by the Canada Revenue Agency.

“With this status, we were now able to issue tax receipts for members’ tithes and offerings,” Muzorewa said.

In 2013, Bishop Nhiwatiwa and his wife, Greater Nhiwatiwa, visited Canada during the Easter Revival. It was their first visit to the country, said Ernest Maforo, who helped plant the church in Edmonton in 2009.

“All the Canada Mission Area churches came to the revival and it marked the first time that members were officially baptized, confirmed and badged (as full members of organizations),” he said.

“This also marked the first time that a pastor was assigned to Canada,” Maforo said. “We are now happy to be receiving Holy Communion on a regular basis.”

“We have the same scenario in Dubai and Abu Dhabi where our members are gathering to meet and worship in the United Arab Emirates and possibly elsewhere in the world like Malaysia, Singapore, Russia and China, which needs to be looked after. Currently in Dubai, membership is at 60,” he said.

“It is just like a district of Zimbabwe. … We were the pioneers of The United Methodist Church in these countries and we were granted only a charity license so that we can worship in our native language.

“All the appointments are done in Zimbabwe. Whatever they do is credited to the work of ministry by Zimbabwe. That is why they have their reports in the annual conference and the financial statement reports to the area cabinet.”

Mukata said the circuits continue to pull their resources together to support projects back home.

“During the Cyclone Idai disaster, we sent $5,000 (USD), which was used to purchase two motorcycles to enable the pastors in the affected areas to reach out to families that needed prayers and counselling.”

He said church members also donated clothes, blankets and kitchen utensils worth $16,000 after the cyclone in 2019.

The diaspora’s youth, men’s and women’s organizations also play a pivotal role in supporting the church in Zimbabwe, he said.

“It has given us young people an opportunity to worship together as a community of like-minded individuals of the same ethnic background,” she said.

“It also allowed children who grew up in the United Kingdom to learn the culture and provide an integration of third-generation children in the church, despite the language barrier.”